‘one aim, one business, one desire’, a repaired exhaust, and cycling for work

This day I am to be joined by Parisa from Swansea.  Swansea definitely feels close to Cardiff, so another indication that I am on the final stages. 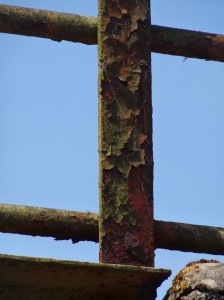 The day before, early in the day, I had thought to myself, "This is the last of the large estuary inland excursions. Now, I have sometimes hated these, especially the day-long march from Penrhyndeudraeth to Harlech, and I have wished them to be over. However, thinking this was to be the ‘last’, had given me a sad feeling, not a depressed feeling, but something akin to nostalgia, but in prospect, knowing that the way of life I have had for the last three months is soon to end and I will return to ‘normal’ life.

Now I think that many people would say that few things about my life are ‘normal’, and indeed someone recently asked me about my ‘non-standard’ academic career. However, the truth is that I have been struggling for a number of years to change some of the ways I work; the move to Tiree has been part of this, as has been my gradual reduction in academic hours. 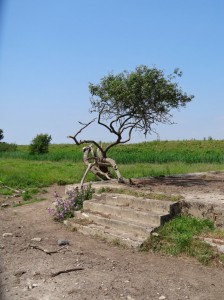 People have often asked if the walk is a journey of self-discovery, and I think not, I know plenty about myself already; the problem is always action not knowledge. And, in a way the walk is a microcosm of my normal life, taking on a bit too much, struggling to do it, not quite feeling I am doing things well enough. However, there are three big differences.

First the patterns of day-to-day life are far more clear cut, measured in miles and sheets of maps. There are aspects that are less measurable, the contacts along the way, the learning from these, but all set within a matrix of mileage.

Second is that the walk has been an expedition of my own choosing. I have laid it open to others, but within a broad agenda that I have set. Most of my time, because of my own broad interests and abilities, I work to other people’s agendas, fitting myself and my time around incoming requests for this or that. 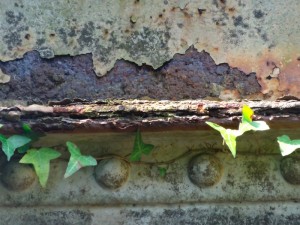 Third, although there are many things to worry about en route, not least the logistics of getting from place to place, still I am mostly focused on one thing; none of the salami-sliced focus I am used to. There have been external things I have either gone off path to do, or that have found me via email, but these have been far less than normal life, I have had a sort of ‘get out of jail free’ card allowing me to say to people, "sorry I’m walking round Wales". So my life has been more one of single purpose, like Matthew Arnold‘s Scholar Gypsy, who lived beyond the age of ordinary men because he had ‘one aim, one business, one desire.’

I’m due to meet Parisa at half past nine in Llanelli, but I remember that I needed to call in to one of the car exhaust places on the edge of Carmarthen, as a rubber piece that holds the exhaust on has come loose, meaning the exhaust is dangling below where it should. I almost decide I could leave it until Swansea, but then decide this would be foolish, so text Parisa to tell her not to leave until I ring.

This was definitely the right decision. When I got to ATS on the edge of Carmarthen, they took one look and told me that in fact two of the four rubber pieces had broken, probably I never noticed at all when the first one had gone, and another was on its way out, after which the exhaust would undoubtedly have come off with a big, and expensive bump. 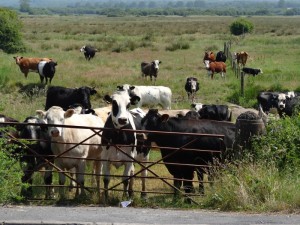 As well as the staff being very helpful and friendly, I discovered that ATS have free WiFi while you wait, so I managed to upload another blog.

Eventually, with a secure exhaust, Parisa and I meet at the Coastal Park Discovery Centre, where several of the official short walks based on the Wales Coast Path begin or end, only to discover there is no long-term parking. This is not in the heart of Llanelli, so how they expect people to do the advertised walks I don’t know.

Happily, Parisa knows of a restaurant, the Sandpiper, on the lakeside just a short distance away, which has parking with no restrictions, so I am able to park the van there and we ‘pay’ for the day’s parking by having a meal there at the end of the day. 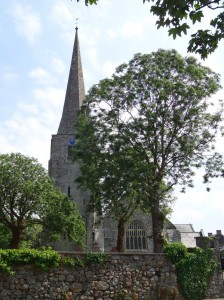 We then drive in Parisa‘s car to Kidwelly to eventually start the day, not much short of noon. We park on the street side, although there a number of car parks too that are both long stay and do not have height barriers, so a campervan-friendly town, so much so that in one of the car parks there is a gypsy encampment.

The day starts with a short road walk on pavements, but after that is all on well-made-up paths initially through woodland and then along the coastal path. The latter is wheelchair friendly, and a major investment at Llanelli.

However, that is getting ahead of ourselves. We take a slightly wrong path through Kidwelly itself. Starting in the middle of the town, I read one Coast Path arrow as pointing along the path we had come, when in fact it was supposed to be the way we should take.
I sometimes wish there was a slightly different colour, or symbol, for the direction you are following, clockwise or anti-clockwise! 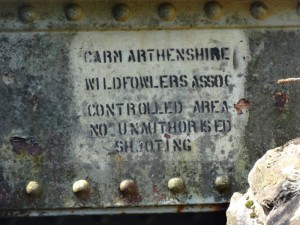 After the town there is about half a mile along the road and then you turn towards Pembrey Forest. Only at the turn there is a sign saying that the Pembrey Forest route is closed due to flooding and signposting an alternative route far inland. It has been a long time since there has been any rain, so we wonder if this is still current, and have almost decided to risk the forest route anyway, even if it means backtracking, when a cyclist passes, about to go along it. We ask him.

"Oh, that was during the winter," he tells us. 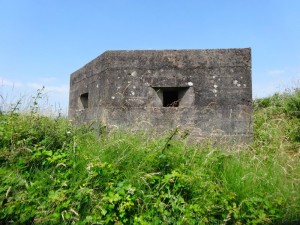 So, we set out, first across open ground, beside drainage channels, with the odd ruined military building visible in the distance. We are skirting the edge of another ‘Danger Area’ on the map, and I think a larger area may once have been used for military purposes, but none of it has been actively used for many years. However, in the distance we do hear the occasional thump of firing from Pendine. 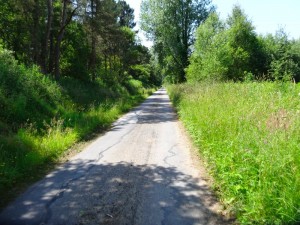 After a while we entered the forest. It was another long hot day, and I’d thought we would get a little shade under the trees, but the wide well-made paths were clear cut to either side, so it is nearly the end of the forest section, a couple of miles, before we find shade to eat our lunch. Before that we passed both some managed fir plantations, but also lots of land that appears to be mature scrubland, birch and, I think, alder, but at thirty feet height, not the normal head height of recent scrub. This is probably what a lot of the countryside would be like if sheep and cattle stopped grazing, and looking under the canopy, where one would have had to make one’s way if travelling before the days of roads, no wonder most movement happened around the shore. 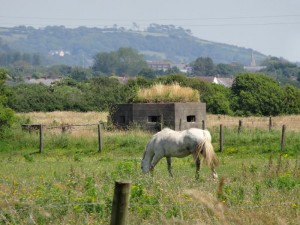 Just before the end of the forest is a small campsite in the woods, and then soon after a car park and mown grass area in the shade of a tree, near an old brick building that declares, in age weathered letters cut in stone, that it is ‘Llanelly Corporation Waterworks, Pembrey Pumping Station‘. We sit under the welcome shade and eat our lunch.

From the map, I can see that beyond this, towards the sea, is Pembrey Country Park including more walks through dune and woodland, and also a dry ski slope, golf course and miniature railway. This is also the start (the ‘Pembrey Gateway‘) of the Millennium Coastal Park, which runs past Burry Port and Llanelli, nearly all the way to the edge of the Gower peninsula. 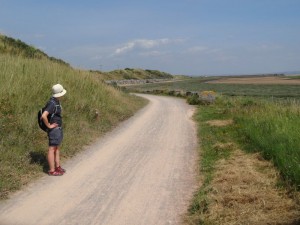 Along the way we meet a man and woman cycling along the path. It turns out they are environmental officers patrolling the paths, looking for problems, and out to give you a ticking off if they spot you dropping litter. On other days, they may be out checking that industrial chemicals are disposed of properly, which may seem more ‘important’, but if the Coast Path is to succeed in getting local people out on their two feet or two wheels, and tourists to come, then this simple patrolling and spotting of problems is just as crucial both for health and wellbeing and for the economy.

"It’s not a bad job, the man says, "when the weather is bad, we work in the office or are in the car but on a sunny day, we can get out like this." 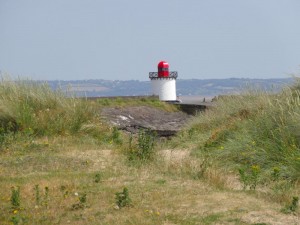 Burry Port lighthouse appears ahead and soon after we get to Burry Port itself, now a marina with a few fishing boats, but in its time, with Pembrey Dock, now silted up, a busy coal dock. The approaches to both were hazardous due to the extensive sandbanks, and were evidently also once the haunt of wreckers.

The first building on the quay is the ‘Lighthouse Café‘, and time for a brief cuppa and a few moments of shade.

The quayside has scattered dockside ironmongery with iron and stone bollards along the edges.  We cross Pont Marti, a footbridge crossing the harbour mouth opened in 2006; before that there would have been a long walk around the whole dock. 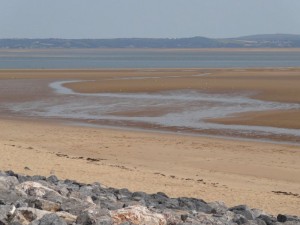 Beyond that is a long easy walk sometimes along the top of sea defences, sometimes through grassy parkland, passing one of the 2001-like metallic Coast Path monoliths.  We drop down onto the sand for a while at Tywyn Beach, virtually deserted despite the hot sunshine. However, we then miss the point we should have taken the path inland over the railway and have to push our way through thick undergrowth to get back on track. 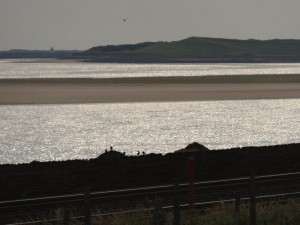 We find ourselves in what an information board tells us is ‘semi-natural grassland’. In the UK, where grassland is almost always the sign of grazing sheep or cattle and land left to its own devices quickly reverts to scrubby woodland, I wonder what would constitute fully natural grassland.

Finally we come to the place where the railway cuts through a tunnel under a small, I think artificial, grassy knoll. This is Parisa‘s landmark for us to turn inland past a small lake to the Sandpiper for dinner.