mostly roads, a little beach, a rebel and a local hero 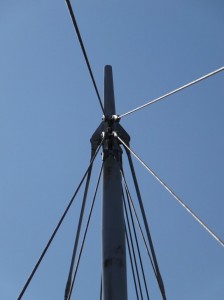 The Coast Path leaves Carmarthen across the new footbridge, I’m guessing a millennium project, then past the station to follow roads through an industrial estate and then alongside the main road for a mile, before turning down small country lanes through the village of Croesyceilog, and then more lanes and farm tracks most of the way to Ferryside.

At the last major roundabout before the small roads is an open garage with garden planters lined up, and behind them a man at work. He had started out making planters for his own garden, and now it is a profitable hobby.

There is one stretch of fields and woods, the former are hard work wading rough thick uncut grass, but midway, like a silver sixpence in a Christmas pudding, is a small wooded stream valley that is magical, with rich fern-laden red earth sides, and dappled sunlight playing onto water. The map says ‘hydraulic ram’ near here, but I didn’t see it.

As I come out of the woods I meet another walker, who is going around the whole Coast Path from Chepstow to Chester.  He is obviously experienced as he mentions having done half of Offa’s Dyke previously as part of a Land’s End to John O’Groats walk. 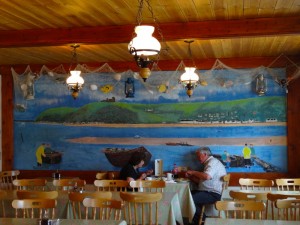 In Ferryside I stop at the ‘Ferry Cabin‘  and have one of their homemade Ferry Burgers.  It is wonderful, a strong gamey taste, almost like a venison burger. I ask the boy who is serving and he says the beef all comes fresh from a local farm.

When I first come in three elderly regulars are talking, I think in Welsh, but it may have simply been toothless English. Later a couple walk into the café, the man’s black T-shirt has an image of two crossed guns and ‘Hippy Killer’ below. I consider my long hair, beard and sandals. However, he does not look as if he would hurt a fly let alone a hippy. Then, from behind, I hear a snatch of conversation, "there’s only two net fishermen left." I will never know where or why it was said. 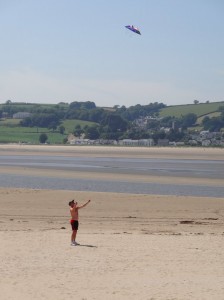 So I set out, at first along the beach. I ask advice on where to get off the beach from a lady walking her dogs, her feet grey after her dogs led her into slightly too soggy mud. I stick close to the shore until there is a sandy path off leading to a place to cross the railway line and a narrow snicket back to the road. You can do this stretch on the beach whether you follow the official path over the top or the coast road. However, a short while later the Coast Path is signposted straight up the hill on newly constructed steps. I felt a little guilty as there has clearly been considerable investment in this route, but I am tired, my right foot hurts and hurts especially badly on uneven ground, and I want to stay close to the sea. So I ignore the steps and continue. 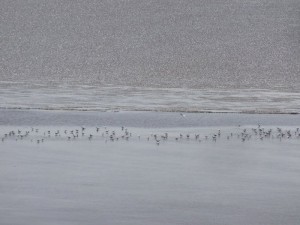 Across the estuary the birds’ calling is like a sort of trilling music, or like a waterfall, with so many overlapping voices. This peaceful sound is punctuated by the occasional dull thud from the firing range far away across the water.

There are good views over the bay from the firing ranges beyond Laugharne, to the Pembrey range on the opposite side, but the only real thing of note along the way is St Isfael’s Church, which sees itself as being a church for the community, and where there is a small exhibition about the Rebecca Riots. 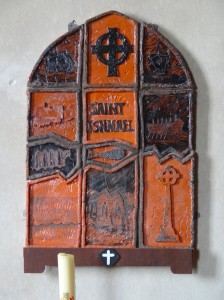 The latter is there because Hugh Williams, the lawyer who defended the rioters in court, lived at the end of his life in Ferryside. Some believed he was not just the lawyer, but the brains behind the whole movement, and 19th century intelligence services had swung into action intercepting his mail.  He also had a colourful life, with several illegitimate children, marrying the mother of one of them when he was 65.

The final approach into Kidwelly is along a tarmaced path through the Glan yr Afon riverside nature reserve, where the church tower and the castle gradually emerge over trees.  This ends at the river bridge where the car park has become a temporary gypsy encampment.

I start to make my way down the main street for the rail station when a bus stops nearly where I am standing with ‘Carmarthen‘ written on it.

In front of me on the bus is a lady with a reflective jacket on and a folding bike. It is only as we get off at Carmarthen that I notice it says ‘Sustrans Volunteer Ranger’. I ask her about it as she unfolds her bike. Her name is Bethan and she explains that she rides the cycle routes, checking signage, condition of track, maybe pushing back the odd bramble.  Thinking about the condition of some of the footpaths, I really appreciate the value of her work.