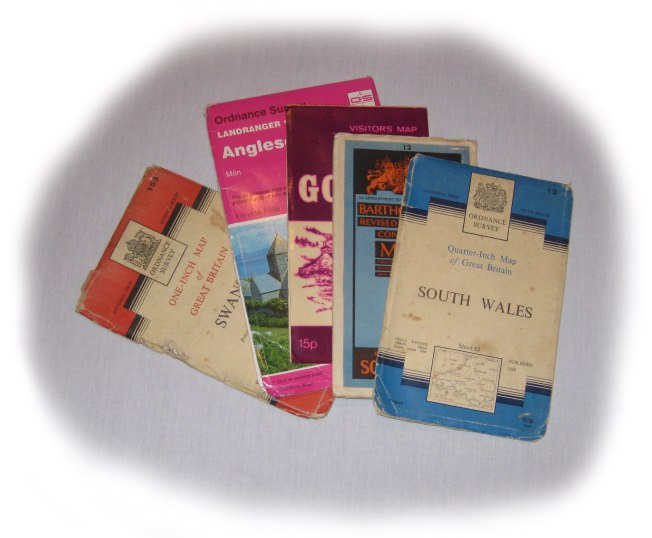 Maps will be a core part of this journey, both the paper maps I’ll use to follow the route and also the electronic maps that I’ll work with on mobile devices.

Some of these will be standard OS maps and the official route maps for the Welsh Coastal path.   However, in the mobile software I develop myself, I will, where possible, also allow the use of local maps.

This is for two reasons:

political – asserting local empowerment against the homogenisation of the global

As an example of the former, the first version of the Tiree Mobile Heritage app was released to coincide with the Tiree Wave Classic, (including customised surfer-specific features!).  The booklet for the wave classic (below left) used the Discover Tiree tourist map, designed by Colin Woodcock and used on the island community website and various island information leaflets.  The online map in the app (below right) uses the same base layer giving continuity between paper leaflets and the interactive map.

In “from place to PLACE“, a collection developed as part of Common Ground‘s ‘Parish Maps‘ project in the 1990s, Barbara Bender writes about the way:

Local maps have their own logic not driven by satellite imagery, or military cartography1; they emphasise certain features, de-emphasise others, and are driven spatially less by the compass and ruler and more by the way things feel ‘on the ground’.  In particular, local town maps are often drawn using a ‘hills eye’ perspective, as if looked at from a high viewpoint, but not directly above as in the more common ‘bird’s eye’ (or ‘Lord’s eye’) view. They may even ‘distort’ scale and orientation, for example to show villages or other points of interest larger along a path. These issues of space and mapping have been a personal interest for many years (for example, see “Welsh Mathematician walks in Cyberspace” and  “Paths and Patches – patterns of geognosy and gnosis“).

In fact, the Discover Tiree map, while stylised and deliberately not including roads that are not suitable for tourists, is very close to a ‘standard map’ in shape, albeit at a slightly different angle to OS maps as it is oriented2 to True North whereas OS maps are oriented to ‘Grid North’ (the problems of representing a round earth on flat sheets!).  In addition I would like to be able to deal with more interpretative maps, such as the mural map found on the outside of MacLeod’s shop on Tiree. Or even the map of Cardigan knitted onto a cardigan as part of the 900 year anniversary of the town.

Lovely mapping project in India, encouraging people in slums to map their areas and use the maps in negotiations with local planners and government bodies. 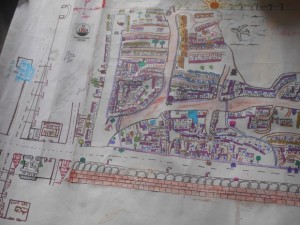 Spinners is our first floor holiday let in Grasmere, Cumbria, furnished with colourful textiles and, naturally, a spinning wheel! It sleeps up to four people in two bedrooms. Contact Good Life Lake District Cottages for information and booking.