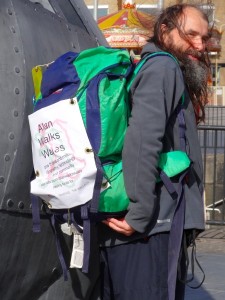 It seems hardly possible, but it was a year ago today that I set off from Cardiff at the beginning a three and half month and one thousand mile trek around Wales.  It seems a life away and yet almost yesterday.

It is very odd, for those months I was the ‘walking man’; surprisingly quickly it was as if my whole life had been, and ever would be, on the road.  It was hard to imagine any other life.  Then, even more worryingly quickly, when I finished I returned to ‘normal’ mode, albeit finding it a little difficult to settle and actually doing some of the jobs round the house that had lain undone for years.  Sometimes I feel island events are more recent than they are because my mind has sort of sewn up the edges between leaving and returning.

I feel a little like Dax in Deep Space Nine, who has a symbiont inside her that has been through multiple hosts, she has all the memories of these past hosts, but is very definitely herself.

Last year Easter was quite early and by the time I started walking it was long past with Miriam’s wedding in between.  This year the 18th of April is Good Friday.  Last night we had a Maundy Thursday service in the Church of Scotland which included foot washing.  Today we worry more about smelly feet inside shoes, but in Jesus time it was customary to wash one’s feet before entering into someone’s home as they would be dusty and dirty from the road.  This feels all so familiar, for the main part of the coats of Wales I wore sandals to walk and, at the end of each day, my already sun-darkened feet would be encrusted with a with layer of dust and earth.

When I returned I had meant to spend time ‘tidying up’ after the walk, filing in missed or incomplete day posts, curating data, choosing photos for cards, and finally writing a book about it all.  But of course, when I got back life started again!  I had three months of work to catch up for Talis plus academic things, so progress has been, at some stages, painfully slow.  Really I needed as much time before to prepare and after to write up and report as I did actually walking … but life is not like that and I was very fortunate to be able to take the time out that I could.

However, in the time since I have not been idle.  I have given several talks about the walk, keynotes at APCHI in India, and Aachen in Germany, to masters students in Birmingham and a public talk back here on Tiree.  Next week I’ll be giving another seminar in St Andrews and then going to a meeting about rural issues and technology in India.  I’ve also written up the notes of the APCHI keynote and used that as the basis of an issue-based online report of the walk – lessons learnt and questions to consider.  And of course the issues of technology ‘at the margins’ are just as true here on Tiree;  despite being 500 miles apart, there is a close link between walking in Wales and various technology focused projects I’m involved with here on the island.

When I first returned home last August, I was managing to do quite a lot of the blog catch up.  Initially I was working backwards filling gaps, as I thought it best to do first those days where memory was most fresh; for the earlier days I assumed I would need to use a lot of prompting from photos and the audio blogs anyway.  This then came to a bit of a stall as I was travelling in the autumn and the REF2014 work started in earnest after Christmas. 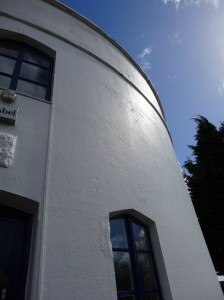 However, now I am using the anniversary as a forcing function to make sure that each day I can tweet last year’s blog … watch out for tweets and Facebook updates that say:

And of course a year ago today I was setting of, walking from Cardiff to Nash near Newport, with Andrew accompanying me and seeing the West Usk Lighthouse and Newport Transporter Bridge on the way … and yes, I have now (after a year) complete the day 1 blog.

Oddly, or maybe not so, I am needing far less reminders than I thought, with surprisingly little prompting the memories flood back in step-by-step detail.

The data side has been reasonably well curated (files and meta files, CSV, JSON, and other techie acronyms) and I am having a first ‘Hack Alan’ workshop in Southampton at the end of May, with another in Nottingham maybe later in June.  I’m doing more work on this periodically.

Fiona has been helping me to go through the blogs adding mark-up for ‘semantic entities’, in order to make an interlinked document about the coast of Wales.  Most isn’t live yet, but there are little bits here and there; if you click on Penarth Head in the final day blog (or here!), you get a little ‘semantic pop up’. Eventually this should mean we have nearly 200,000 words of text with entities marked and resolved, including names, places, etc. As well as augmenting the text itself, I hope this will be a useful corpus with a ‘gold standard’ markup for those wanting to do entry recognition, name resolution, or maybe other more sophisticated narrative markup. 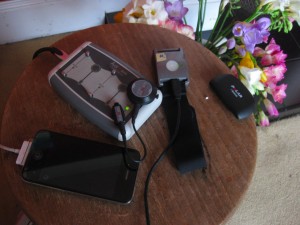 With 60 days worth of near continuous readings, the biodata is probably a unique resource in the public domain.  One of the goals of the workshop in Nottingham will be to further process this: easy linking to GPS trace and qualitative data, creating heart-rate data from the ECG data, etc.

I also need to learn how to effectively publicise the availability of all this data.  If you or someone you know is interested data for health and fitness issues, life logging, quantified self, semantic web, or any other use of this data please get in touch or simply access it here.

Looking forward I want to spend some more time back in Wales, revisiting places, and talking again with people I met last year and also those that I missed.  During the preparation for the walk, during the walk itself, and since returning, I have met and been in contact with many academics and artists for whom walking and human contact with the land and landscape is an intimate aspect of their work.  So next year I’d like to organise some sort of festival of the foot, or symposium of the human body in the landscape … would you be interested?

… and next year, maybe, my feet will begin to itch again …

1 thought on “A year ago today”