A long day, over high mist-swathed moorland, through horizontal stinging hail, across rolling farmland, and honey-sweet gorse hills, passing pack-laden school parties and meeting walkers from Colwyn Bay, before eventually skirting the escarpement high above Prestatyn and, with the falling sun, to the sea and the northern tip of Offa’s Dyke path. 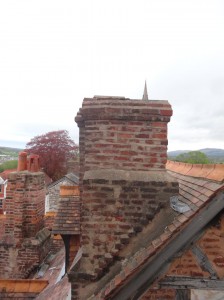 It was a late start to what became a long day.  Breakfast was at Wetherspoons Crown Hotel where I’d spent the night. Although it is a chain, Wetherspoons has done a good job here, spending two and half million restoring the hotel, with wooden panelling, William Morris wallpapers and walls decorated with historic plaques and paintings by local schoolchildren.   The centrepiece is a towering eight-foot statue of Owain Glyndŵr.  I was typing over breakfast and so late to get finished, and then had a wait for the taxi to take me to the start, the car park below Moel Famau where I finished last night and where the planned shepherd’s hut would be sited.

I’m sure the hut would have done good service this morning as the car park was full of teenagers, clustered around a couple of minibuses, the tinny sound of pop music half drowned by excited chatter. As I climbed up the path to Moel Famau I passed what I took to be some of their teachers from the mentions of ‘school’ and ‘DofE‘ that I heard as I passed.

I realised too, in passing them, that I had adopted a long-legged loping stride even going uphill.  "I’m becoming one of those annoying people who make hill walking look so effortless", I thought, "but if only they could see me at the end of the day!" 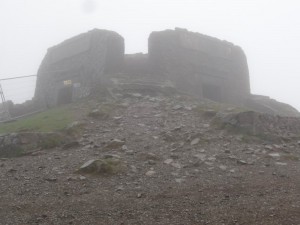 At the top of Moel Famau, the Jubilee Tower was shrouded in mists. The Tower was built in 1820 by the Prince of Wales on the Jubilee of his father – as Talentog put it, "one of the mad kings". The tower had a square base, with high lintel-topped openings on each side, like giant doorways, and an obelisk-like tower atop.  The latter fell down in a storm and the tower fell into disrepair, being half buried until Lottery-funded restoration work began in the last year. The work is not finished, but the lintelled openings have been cleared and I headed for the lee-side one to get some respite from wind-lashed rain. A group of DofE-ers were already there, gathering themselves ready to brave the elements again.

Heading back out myself, as I wandered down from the summit, the mists and rain cleared, looking back the Jubilee Tower was cut sharp against the skyline. I meet another group of DofE-ers climbing Moel Famau from the north; one of them noticed my banner and quizzed me about the walk, "one day is hard enough", she said, "and I’m fifteen".  They were glad that they were nearly done for the day, their end point the car park where I’d started, but seemed happy despite the weather, the first wet day I’ve had. Further on another group of teachers explain that there are several school DofE groups out that day, going in different directions, and for their group, it’s the first time on the hills.  I can see why they bring them here, it is hard to go wrong as the paths are wide and clear, yet it is high enough to give a real sense of achievement, and, when the mists clear, stunning views from Snowdonia‘s mountains to the sea. 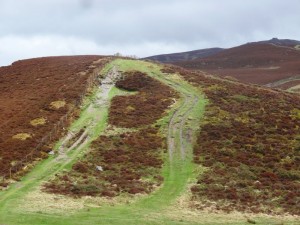 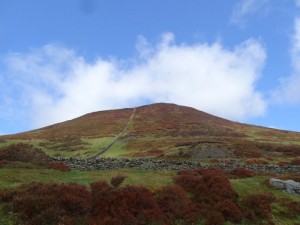 The official Offa’s Dyke route skirts the side of Moel Arthur, another Iron Age hill fort, but I diverted off the path over its top, no gently meandering climb, but straight up.  As I reached the outer ring the hail started, and coming over the top the wind and hail were thrown straight in my face.  The hailstones were small, but driven at speed, as if someone were taking pot-shots with an air-pistol. To protect my eyes I walked half sideways, my left shoulder hunched towards the wind, but still the icy buckshot stung my nose and left cheek. 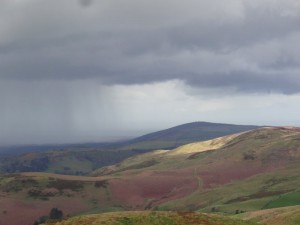 Just as suddenly, descending the hillside, the hail stopped and skies cleared again, this time to glorious blue-skied, cloud-dappled sunshine, although to the west dark swathes of further rain could be seen cutting across the countryside.

From here on the ridge gradually descends and ahead I could see a group with whom I was gradually catching up.  As I drew near the group split, the larger part branching further along the descending ridgeline to the north, and three of them, with two dogs, following the Offa’s Dyke downward route towards Bodfari.  I greeted them as I passed and then one of them said, "are you Alan?" I thought they’d just seen the banner on my back, but it was not just that, "I saw about you on the TV", he said.  I’d given a couple of radio interviews early in the walk, but not spoken to anyone on TV, so they must have just reported using still images, I guess on the local news. 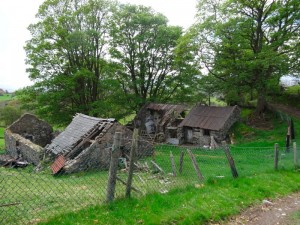 The group came from Colwyn Bay, and I think they said a rehab group, but wasn’t sure if I’d heard right.  However, I later learn that there are many rehab centres along the North Wales coast, taking advantage of cheap accommodation and natural environment.  We walked the rest of the way to Bodfari together, hoisting dogs over the stiles on the way; one a little Jack Russell, virtually hoisted by its lead and harness, the other, some sort of bull terrier, tough looking, but friendly, needing a bit more lugging.  As his owner put him down, "I don’t think he’d let anyone else do that", he said. 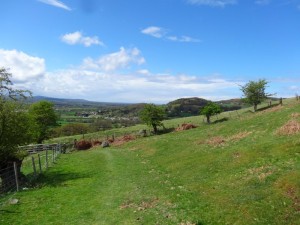 I was reminded of Teasel, our Bernese Mountain Dog, who died some years ago.  She was too heavily built to jump over stiles as a collie would do, but did not like being carried.  Although she was heavy, I could pick her up, one arm behind her back lags, the other under her breast bone, and could even step up the stile, but with no hands to hold on … and then, as I stood precariously astride the stile, she would start to struggle, kicking her legs to get away. Imagine holding on to a half-hundredweight sack of potatoes that starts to wriggle in your arms.

I had intended to stop at the pub at Bodfari, get a quick late lunch, and ring Stuart, who was going to give me a lift back to Wrexham after a family day on the coast, to work out where and when to meet.  The group’s minibus was in a car park right next to the pub, but, not being sure if they had said ‘rehab’, and if so, rehab for what, I decided to skip the pub and press on to Rhuallt, three or four miles further on where there was another pub marked. 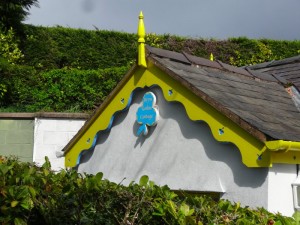 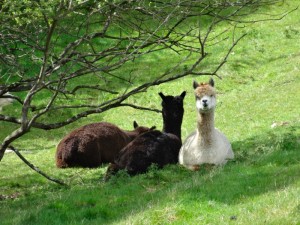 One last (I thought) climb up small lanes and mostly clear paths, to see views towards the sea ahead and Prestatyn appearing in the distance.  It seemed so close, only seven miles as the crow flies, but a lot further by the meandering Offa’s Dyke Path.  I felt on a roll, and wondered if I would be able to make it all the way to the coast, otherwise I’d have a bit of the Dyke path to ‘finish off’ in the next week.  I wonder now whether low blood sugar was already clouding my judgement slightly.

The path has to take a circuitous route to cross the busy A55 North Wales Expressway, and drops into Rhuallt.  From the map it looks as thought I will pass by the pub in Rhuallt for much needed, and, by that stage, very late lunch (near to 5pm), and ring Stuart from there, but as I pass through, expecting maybe to find the pub at the edge of the village, I never pass it.  I assume the icon on the map was indicative that there was food in the village, but not where! 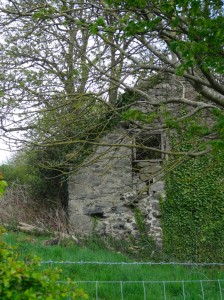 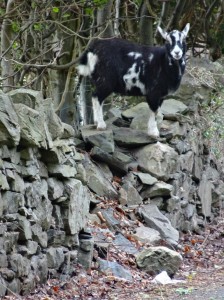 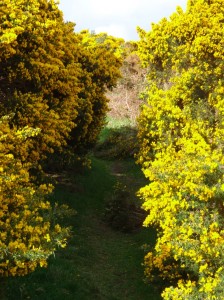 I kept thinking that the path would be ‘downhill all the way to the sea’, but in fact, out of Rhuallt, as if as a reminder of all those climbs in the mountains you have passed, the path cuts directly across the contours up a small, but very sharp, hillside, into first tree cover and then golden gorse, growing so close around the path that you are pushing through, your nose inches from the heavy sweet flowers, and the prickly branches catching on your clothes.

I should have rung as soon as I got to the edge of Rhuallt, but again, I think I wasn’t thinking entirely straight, and simply putting one foot in front of the other.  Eventually, in a tiny village with a Mt Hermon chapel, there is a seat, and on auto-pilot I sit down, get out the phone, see that there are messages, and belatedly ring, knowing I am already far too late for the lift, but to apologise for not ringing earlier.  I stuff myself with cereal bar and chocolate, drink plenty and continue the final few hours down (!) to Prestatyn.

There are various roads directly to Prestatyn, but the footpath wends its way, taking country routes where possible and skirting the back of the long escarpment that lies above the town.  After occasional tantalising glimpses of parts of Prestatyn and the sea, through gaps in the hillsides, eventually the ground falls away and you are on the top of the old ancient sea cliff looking down on the flat land that would once have been beneath the waves, now filled with lush farmland and packed housing.

Rather than dropping straight down, the path follows the line of the escarpment, usually just below the actual ridgeline, a meandering cliff-side walk that I guess will be typical of many in weeks to come, except not crashing waves below, but an undulating sea of roof tops, breaking against the green scrub-clothed cliff base.

I knew that the path would eventually cut down from the escarpment for the last mile or so through the main street of Prestatyn and to the end of Offa’s Dyke Path where it meets the sea.  Tantalisingly the path would dip down, "ah I’m there", I would think, only to rise again as I passed some dip in the land.  But, at long last, as the sun dipped towards the wind-farm speckled sea, the path did drop into the town below, through a few streets of housing, and then the long road to the sea.  I stopped at the first fish and chip shop I passed and found they were about to close, but got what they had left, a sad sausage and overcooked chips, soggy, not crisp.  Later the taxi driver told me that there were far better fish shops than this one, but it was the first I saw and I was very hungry. 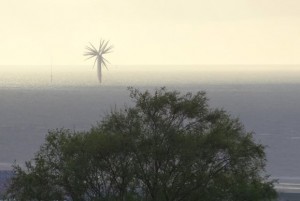 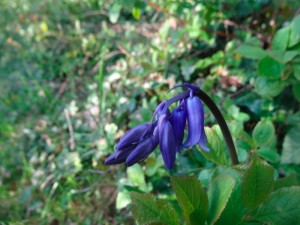 It was cold and dusk was falling as I got to the path’s end by the sea, a tall silver comet-tail sculpture marking the end, and an information centre that was obviously closed then (8:30pm), but was still closed when I next passed three days later at lunch-time.

After such a long day, I sort of expected fanfares, but have merely dim photos, the camera held at arm’s length to see me next to the end-markers, and then ringing for a taxi to Wrexham (a long and expensive journey) and drive down to the Halkyn Travelodge on the A55 near Flint as I was too late to go to the campsite. 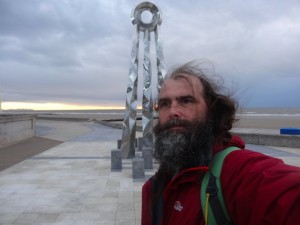 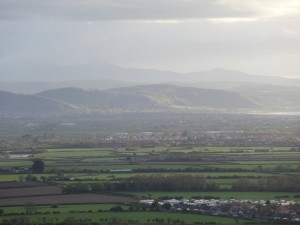