A day that starts with a journey to World’s End and finishes at Weatherspoons, taking in an Iron Age fort, Heathcliff moorland, and, guided by a gaping socket led eventually to the future site of a 21st century shepherd’s hut. 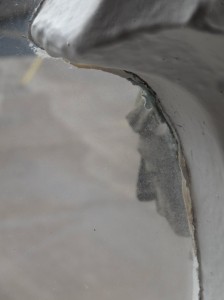 Richard Picking set me well on my journey, taking me from my hotel, The Lemon Tree, in Wrexham and dropping me where I’d left the path on Wednesday evening, already high above Llangollen, with Dinas Bran rising to the south. The path follows a road for several miles, and for those who do not want to walk, a drive along this is well worth while, with views the length of the Dee Valley.

Barely a half mile in, a car slowed as it passed and I heard a voice, "Hello Alan". At first I thought this was someone else who had found me on my way, but then realised that they had simply read the banner on my back.

The car contained two women, one who had just moved to the area, and the other her visitor from further afield, taking a day out together and enthralled by this road with its aptly named ‘Panorama Cottages‘ and leading to ‘World’s End‘. As we chatted we realised I had walked only a short way above her house on the way out of Trevor two days before. I hope it takes less time to become a ‘local’ in Trevor than Kington.

The road continues to gain height slowly, wending its way beneath the escarpment of ‘Craigiau Eglwyseg‘ or ‘Trevor Rocks‘. The former is named after the mountain beyond, and must mean something to do with ‘church’ as ‘eglwys’ means church in Welsh, but I will have to look up what the ‘eg’ ending means. 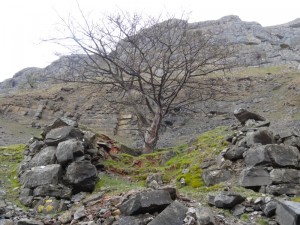 Eventually the road drops to the valley floor, but the path continues to maintain height (phew) as it cuts along the scree slopes below the scarp, passing a few farms, and just up the slope two trees that have small walls around them, almost as if they were some sort of Capability Brown parkland amongst the scree. I assume the walls came first, and the trees simply took root in one of the few stable places in a shifting hillside, but I could not work out a purpose for the walls themselves. 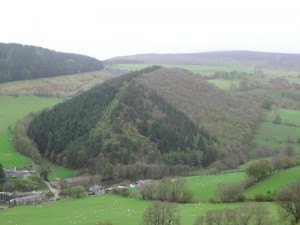 Across the valley is a forestry plantation on a long low hill. The hill appears almost perfectly rectangular with a triangular cross section, as if it were a flow bed or grave.

Bran was said to be a giant, and while the ships of the Welsh sailed across the Irish Sea to rescue Bronwen, Bran had to wade across as no ship was big enough for him. The reports came to the king of the Irish,

"A forest is approaching across the sea, and in the midst of the forest a mountain with a sharp ridge and two lakes either side, with beacon fires burning in each lake."

The king sends a message to Bronwen,

"What is this approaching from Wales?"

"Ah," she replies, "the forests are the sails of the armies of Wales and the mountain rising between them my brother Bran come to rescue me from my disgrace at your hands. The ridge is his nose and the two lakes his eyes each side, but, woe to you and all Ireland, the beacons are the fire of vengeance burning in Bran‘s eyes."

So the bloody Celtic battle began, the Welsh took the advantage, but one of the gifts that Bran had given when the King of Ireland first took Bronwen for his wife, was a cauldron that had the property that when a dead body was thrown in, it would awake again to life, except dumb.

As the living armies perished at each others’ hands, the Irish zombie army grew, and it seemed as if the Welsh would be slaughtered against the shoreline. At the moment of despair, Bran‘s brother, whose pride had initially caused the troubles (a long story, involving horses tails), threw himself down amongst the Irish dead, and when when he was cast into the magic cauldron, pushed, Samson-like, against its side, bursting the cauldron, and his own heart.

Robbed of their army of living dead, the Irish forces collapsed until all that stood upon the blood-soaked mud were a dozen of Bran‘s closest companions, and Bran himself, mortally wounded. It was then, when Bran died, that his head was cut off and taken to spend a year and day of feasting with his remaining companions, before its interment in London.

But of his body, the legends say nothing, except here, in sight of Dinas Bran, a giant grave mound. 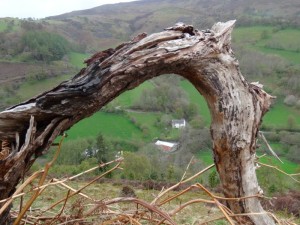 Eventually the path leads to the valley head, and switch-backs across a slippery concreted ford. In a clearing a large group of anorak-clad youngsters are gathered and eating early lunch with laden rucksacks scattered around. Older leaders shift cars around, either having just dropped them off, or simply met them midway to ensure none have been lost. I assume it is Duke of Edinburgh’s Award or something similar. I notice one group clustered, heads bent over an iPad.

I recall starting DofE at my own high school, and finished everything except ‘hobby’. I was never a collector (didn’t have the attention span!), and couldn’t do after school activities as Mum was caretaker at the church and so every day after school I shifted chairs, washed dishes and brushed floors. My free time was spent walking through the bushes in the local park imagining myself in a distant jungle, other games of imagination (usually involving things going ‘bang’), and reading late into the night.

Thinking back, I could easily have had Scouting as hobby, but the only thing I thought of was reading, so was tasked with keeping a reading diary for my English teacher. The combination of my slow and unreadable handwriting and forgetfulness for anything regular meant it never happened. I would lie to say I have better self-discipline today, but…

I had confused World’s End with the spectacular Horseshoe Pass (I think where the opening scene of ‘Very Annie Mary‘ was filmed). In fact World’s End seems to refer more to the way the lush long valley gives way to Brontë-esque ‘blasted heath’, black bog covered in still-brown heather, with a pathway in places made by pairs of parallel eight-inch planks. As I get to the end of the bog towards the forest, mountain bikers pass peddling hard uphill. Richard had told me this was mountain bike territory and how he had once tried to ride across the boardways, at risk alternatively of getting stuck in the gap between boards, or cast off from the sloping boards into black oil-slicked bog to either side.

The way down to Llandegla was uneventful, a long descent through forest and woodland. Partway up I meet three women, in accidentally matching cerise/purple walking gear, who were wondering about the right path up until they saw me coming down. 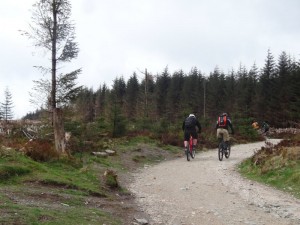 The Crown Inn in Llandegla says it is under new management and is open for food including “kick a***” all day breakfast, but the doors are locked and the lights off. Happily the Willows Café across the green is open and I eat a toasted sarnie, while using their free … and working … WiFi.

Llandegla is tiny but manages two old chapels and an Anglican church, reminder of the long rivalry between dissenters and established church that Borrow writes about repeatedly. The church says outside that it has refreshments, and the post office too has a small table for occasional teas, so a hamlet of culinary choice. Next door to the post office is an old cottage with a large black anvil outside. A man in his garden across the road shouts across to explain that this used to be the old forge and that the street name means ‘free street’ in Welsh, so it must have been a blacksmith going back many years.

Leaving Llandegla, the path cuts across open farmland, towards the hill range that will form the next day and a half of travel. However, soon the signs become less and less legible, with the circle where they belong still incised in the fence post. This could simply be wear and tear; however, each round sign is held by three small steel or brass screws; the screw holes are clearly visible, but there are no rusty remains, each hole is clean and open, suggesting unscrewing. I know some landowners resent walkers crossing their fields, but if it is deliberate obstruction, it is short-sighted. All it means is walkers wandering over more of the their land trying to work out the way, rather than sticking to the footpaths.

After a short unscheduled detour due to the damaged signage, I re-find the path and start the slow ascent of the first foothills of the long ridge of the Clwydian Range. The path breaks clear of farmland and rises past a radio mast and signs to fishing and teas and cakes. Later I meet the owner of (one of) the fish lakes and discover that what I took to be signs for a single lake were in fact for two lakes. Originally the lakes served different markets, one was coarse fishing and the other trout, but then the other one changed from trout to be coarse fishing too, leading to just a little rivalry.

I also learnt about the BROWN SIGN. Anyone who has driven in the UK will recognise the brown tourist signs pointing to historic sites, accommodation and tourist venues. I had thought that these were placed and chosen purely on amenity grounds, but I discover that individual venues have to apply, going through a long bureaucratic process, and then have to pay the county sign writers exorbitant fees to make the signs. Authorities differ in their rules, some allowing brown signs on main roads (where passing tourists will actually see them), whilst others do not want to clutter principal routes with excessive signage and restrict brown signs to minor roads. … and I just thought they were signs.

Earlier in the trip I had discovered that the whole northern section of the Offa’s Dyke Path is an invention, based not on the most likely route of the Dyke, but on the criteria for a ‘National Trail‘. Given there is therefore no need to actually ascend the Clwydian Hills at all, it seems strange that, at several points along the range, the path rises nearly to the top of several hills and then does not rise quite to the top, especially when the top is a hill fort. So, at several places including Moel Fenlli this day and Moel Arthur the next, I took short diversions from the formal route, which was skirting a contour line, to go over the top, and so see views across to Snowdonia in the west and, eventually, the sea in the north.

At Clwyd Gate, the main pass over the Clwydian Hills into Ruthin, there is a substantial café/restaurant, which is currently closed and for sale. I later learn it has been on the market for 18 months, a sign of hard economic times.

Eventually, after another ascent and descent, I get to the Blwyd Penbarra car park where @talentog007 meets me to drive me down into Ruthin and to chat about the Moel Famau hut. Around 350,000 people stop at the Penbarra car park each year, and the idea is to place a kiosk there, in the style of an old shepherd’s hut. The idea is that it would be an amenity to tourists in the area and also act as employment for young people in an area that has few prospects after school. The project is still gathering funding, but Talentog used to work for the council, so knows her way round the funding systems. Look out for the hut late this summer. 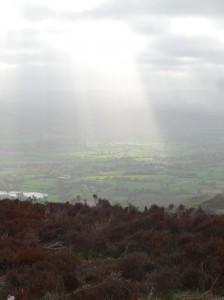 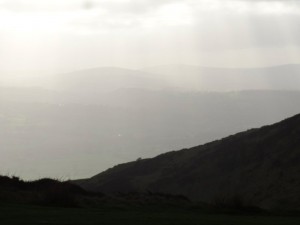