a lightning visit to the island of the saints, fear of loss and a gift of cake

It is a long morning washing clothes at the campsite laundrette and trying to catch up with (some of) the backlog of email over a late breakfast. So, by the time we walk along the beach to Tenby, it is quarter to three and the man selling tickets to Caldey Island is worried that it is too late and we will not get our money’s worth and so he knocks a few pounds off the ticket price. 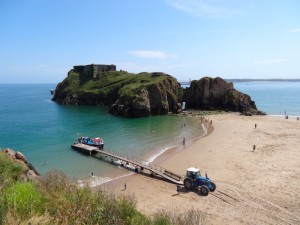 The boat leaves from the beach below St Catherine’s Island with the derelict Napoleonic Fort on top.  Since its military days, the fort has been a private home and a zoo and there are now plans to connect it permanently to the headland by a suspension bridge and reopen it as a tourist attraction.

The current access is via (barricaded) steps from the sand bank that connects the island at low tide. I recall from when we stayed in Tenby one summer for two weeks, how we often came down to this beach, but the lifeguards would warn when the tide was about to overtop the sand bank.  It did not cut off the beach, but the rush of water over the bank could easily sweep a child off their feet and out to sea. 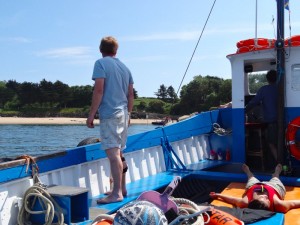 We have the boat to ourselves, just the crew and two young girls, who I assume are relatives of the skipper, sunbathing on the bow. The water near Tenby has that over-silken-smooth look, like a photograph taken on slow exposure, blurring out the fine details, leaving it oily heavy; maybe literally oily heavy as this is the same sea you see in the wake of boats.

The journey is short, just three-quarters of a mile, with views of the far side of St Catherine’s Fort and ever approaching Caldey Island, its wide beach and small jetty. We double-check the time of the last boat as we get off, five o’clock. I wonder how often someone gets left behind and the monks have to entertain an unexpected guest. 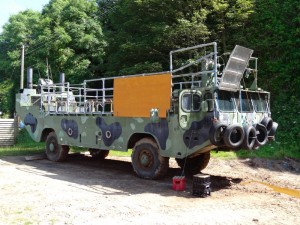 From the boat it is barely ten minutes up to the Abbey and sort of ‘village’ green with shops and small café. The way leads past a small, but impressive, red sandstone cliff under which is parked an even more impressive vehicle. It is one of those amphibious ‘ducks’ that are sometimes used for river and road tours – I want one! A notice says that it is used when the tide is too low for the jetty and I mentally resolve to revisit some day at low tide.

It is likely (reading Bushell’s Guide) that ‘Caldey‘ is a Norse name meaning "isle of the fresh spring", as there is a good water supply on the island. This would have been important for the Norse raiders for whom taking on water on an offshore island would be a lot safer than making camp on land. 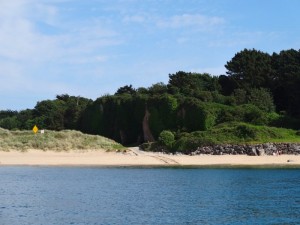 I recall I was on holiday in south-east Ireland and wondering where the ‘ford’ was at Waterford, when for the first time I realised that this was not a ‘ford’ but a ‘fjord’, as Vikings occupied and named places both there in and in Pembrokeshire: Milford Haven, Haverford West.

The spring will have also been the reason that Caldey has been occupied since Neolithic times, soon after the last Ice Age, with flint working dating back 8000–9000 years; and for the early Celtic monastery and later Norman priory on the island.

The Priory was occupied until the dissolution of the monasteries under Henry VIII, and was in private hands until it was sold to Benedictine monks in 1906, and later handed to the Cistercian community who are there today. 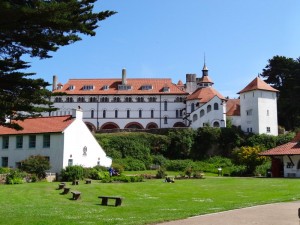 It is barely five minutes from the beach to the small village-green-like area of shop, tea-room and post office with the Abbey buildings rising behind.  Although we didn’t see the spring, there is a large duck pond.

The Abbey itself does not feel as if it belongs on British soil, instead a combination of white-rendered walls and slightly convex red-tile roofs that would look more in place on an Alpine slope – very much Sound of Music. I guess that the monastic orders in Norman times may have been a bit like Tesco today, building to a standard pattern across Europe, although maybe the colouring and roof shape are more recent. 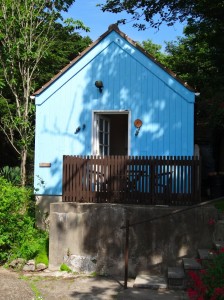 We do not have much time to wander the whole island, but we visit the main Abbey chapel.  At one point I almost walk into another small wooden chapel, but just in time Fiona (who actually reads notices) saw that it said ‘private’. During the summer months the monks must long for 5pm when the last boat goes back and they can have the island back to themselves for prayer and work.

The Cistercians were founded at the end of the 11th century as a reaction to the growing riches of the Benedictine monasteries of their time, returning to a pattern of life focused around manual labour and prayer. The Cistercian monasteries of the post-Norman period, such as Strata Florida, were critical in transforming the landscape of Wales as they created huge upland farms.

Today the Cistercians of Caldey Island do not transform landscapes on quite the same scale, but the same ideals of manual work are apparent in the various products they make, in particular the perfume, which is one of the principal products of the island, and also the chocolate in the gift-shop, another signature item.

We decide gifts of chocolate would not last long in the heat, but we do buy a few soaps, and in the gift shop I succumb to a few books: 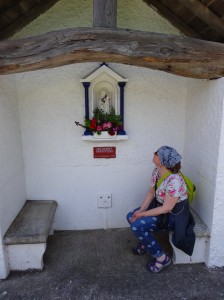 The last of these is the latest of a series of poetry books written by one of the monks, mostly about the island and his walk with God.  Much of the verse is of value mainly for the sentiment it expresses more than its form, but every so often one stands out.

Along the Ridge (p. 61)
Between us
no word is spoken
in the sunset’s afterglow.
… 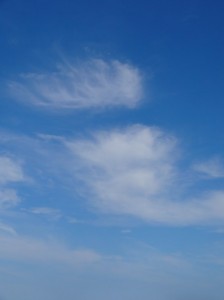 Maybe most topical for the walk is ‘Fear of Losing You‘ (p.54), written not about a lover, friend, or favourite pet, but a new mobile phone. I’m writing this about 2 months after the event and a recent Times report on ‘Mobile phobia‘ gives this a name nomophobia and reckons that, according to a study, over half of British workers live in fear of losing their phone. David Hodges ends up looking back to God who:

… is always there for us
watching, waiting,
always ready
to receive us.

… and presumably his battery does not run out.

Having not gone for a walk around the further parts of the island due to the limited time, we suddenly realise we still have loads of time before the boat is due, so we go to the tea shop; we are both peckish by now, having not eaten since breakfast, albeit a late one.

It is too late for hot food, and the last of the fruit cake has gone, so, lacking a sweet tooth, I struggle to find something to eat, when a lady comes in and says "you can have my cake" and hands me a small plastic box with cake inside. She had bought it with her meal earlier and it had been too much.

It is a small act, and unexpected, but yet maybe not so amongst visitors to an ‘Island of the Saints‘. 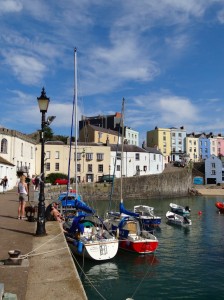 When we return her box later she and another visitor are sat talking to one of the monks whom they are evidently visiting for the day. Maybe he is a relative or perhaps a spiritual adviser from a previous retreat on the island.

Still in fear of missing the last boat, we pass back through woodland, past the duck and red cliff to the shore, wandering slowly amongst those who simply came over to sit or play on the beach, and yet we are still twenty minutes early and catch the last-but-one ferry that is about to set off.

It is full, unlike the one we took on the way out, and we wonder what happens at the very last run of the day if there is not enough room. Do they do an extra trip, or leave some on the beaches? 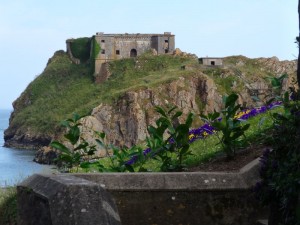 Back in Tenby the town is shutting down, but horror of horrors, the bookshop is still open and, like bees into a honey trap, we wander inside.

I come away with maps for the Carmarthen and Llanelli areas and also a couple of relevant books by local authors:

The first of these is about a woman who goes out to Patagonia, in search of the Welsh connections there. This was a voluntary exile in the 19th century by a group who believed that their culture and language were so under threat in Wales itself. This was of course a period when the language was still being actively suppressed, as it was well into the 20th century. 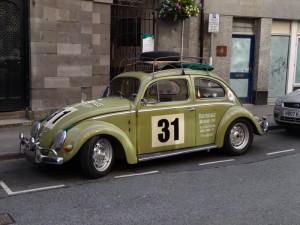 The second is by a woman whose husband died and as a way of dealing with grief she set out to run around the world as a memorial to him. My childhood imaginings of walking round the world were one of the inspirations for my own (relatively) short walk around Wales, but no, I am not getting any ideas.

We ate in one of Tenby‘s many fish and chip shops and then walked back to the van along the now cooling sands.