in which Fiona and I travel through dark tunnels and across wooded cliffs, to get to the end of the Pembrokeshire Coast Path

Today I am not alone; Fiona is walking with me the short hop from Saundersfoot to Amroth. 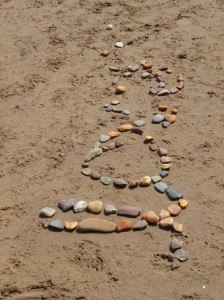 On the way to Saundersfoot, we talk with the taxi driver about the industrial-scale lime kilns that give the campsite its name.  Mostly around the Pembroke coast there are small lime kilns at each tiny port, cove or inlet where ships could bring in lime; it would be burnt and then the quicklime taken by horse and cart to fertilise the acid land beyond.  Here the limestone is local and so the kilns are set back from the sea.

You can follow the road through Saundersfoot, but it is nicer to walk along the beach to start. The path initially follows the Dramways, a series of tunnels and low-level promenades, which I assume is the route of old trams for the coal mining that was once an important industry in the area. Unfortunately the excellent leaflet that tells you about it as a walk does not tell any of the history. However, I note that there are more leaflets about circular walks around Saundersfoot, one of which is an industrial history one. 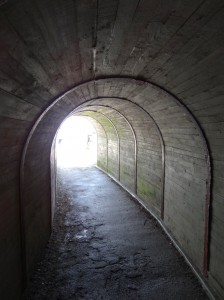 If you take the beach route you miss the first of the tunnels, which is lighted, the other two are not. The first is only very short, but the second plunges you into darkness for several hundred yards, the floor and walls only vaguely visible in the dim light from the tunnel ends. If you are scared of the dark bring your own torch.

After the tunnel is a level concrete promenade-style walkway, which leads you all the way to Wiseman’s Bridge. The rocks between promenade and sea start as flat limestone pavements, criss-crossed with tiny fault lines. Later the strata start to slope and the different erosion rates leads to a mix of sand between bars of rock that are almost like natural groynes.

The bridge at Wiseman’s Bridge just crosses a small stream and I don’t feel any wiser having crossed it.

The man at the Saundersfoot Tourist Information recommended the Wiseman’s Bridge Inn for lunch, and it is a good choice.  So, whether or not wiser, we are certainly fuller as we set out again on the path to Amroth. 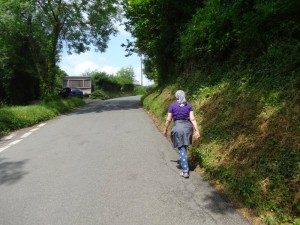 This initially sets off up the road behind the Wiseman’s Bridge Inn, then branches onto another smaller road until, just as it levels off, you turn onto a variety of wooded paths and grassy cliffside paths. After a couple of miles, you drop into Amroth. The same man at Saundersfoot Tourist Information told me that there were not many houses in Amroth, but that a substantial number were pubs or cafés. I can confirm this. 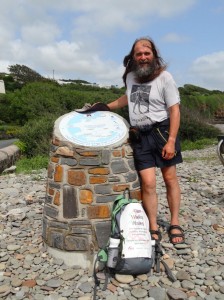 We walk past many cafés advertising ice creams, and beach shops selling buckets and spades.  The prom goes on for about a quarter of a mile, but for some reason, maybe erosion, is blocked off. We take a short road stretch of less than a hundred yards before continuing along the prom, past a man stepping carefully over the head-sized boulders on the waters edge, past Amroth Castle that seems mostly Victorian, and eventually to the plaques and plinth that mark the end of the Pembrokeshire Coast Path and only 190 miles left to Cardiff.

2 thoughts on “Day 78 – Saundersfoot to Amroth”