The Cleddau Bridge rises high above the estuary, dominating the view east from the Brunel Quay in Neyland, where I had parked the van. The Coast Path rises up through the back streets of Neyland to a terrace overlooking a small park and the estuary beyond.  Against the metal railings a fire grate sits with scrap wood in it, in some surreal, unfathomable parody. The path then wends its way through scrubby woodland overlooking a smaller grey-mudded tidal estuary. 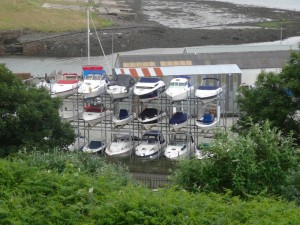 At one point I hear some whoops of delight and then some yells. A few moments later a rope swing appears and below it two boys peering down into the bracken below. I hear odd snatches:

"he just fell off"

"I saw his head for a moment, he was smiling"

I wonder whether I should stop to check that their friend really is OK and is not lying down the bank with a broken leg. However, they seem to think he is just hiding, and, in the current climate, a lone man approaching young boys in the woods, however well intentioned, is likely to be misconstrued. How bad would it have to be before that reticence would be overcome? Would I have to hear screams, see blood?

After a while the woodland walk comes out beside the main road, and for a moment I think right by the Cleddau Bridge before I realise that while substantial, this is still a relatively small river bridge. However, the ‘small’ river it rides high above manages its own marina of vessels and a swan left dry on the mud when the tide went out. 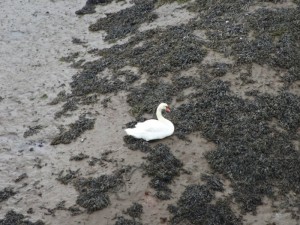 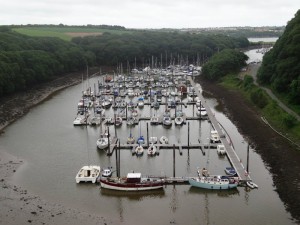 As I criss-cross, taking photographs of either side, a cycling family passes with a combination of young children on small bikes, and the smallest child on one of those tag bikes behind the mother. The road is clear, so I step off the footpath to let them pass. How far are they going?  I don’t see them again, but I can’t imagine them crossing the Cleddau Bridge so assume they took some side road.

Coming to the Cleddau Bridge itself, I guess I would have been more instantly awed if I hadn’t already walked the Severn Bridge. However, it is still pretty long and pretty high.  One of my first sightings from on high was the Brunel Quay and my campervan sitting there, waiting for my return. Directly below, a little hamlet sits in the shadow of the bridge, I guess originally gathered around the old ferry jetty before the bridge was built.

It is only afterwards, reflecting, that I realise this is a pure clapper-style bridge, with no suspension cables above, or supporting arches below, just long, self-supporting spans between tall concrete pillars.

Where the roadway passes over the pillars there are maintenance access structures sitting off the side, although only projecting a few feet further than the carriageway; still, the wind made high pitched howling through them. By the time I got to the middle, the light breeze felt like a heavy wind. A cyclist passed and I was glad I was walking rather than being buffeted on a bicycle. 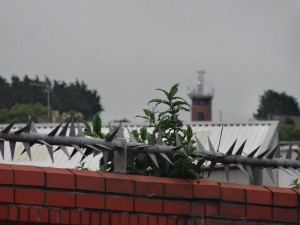 I almost feel guilty passing the tollbooths without paying, then turn right at the roundabout into a housing estate, part of Llanion. The estate pub, the ‘Cleddau Bridge‘ looks out over its namesake and sports a cannon matching one on the public picnic area near the bridge. This area has been an area of abandoned forts and weaponry, from Martello towers and Napoleonic forts to Second World War gun emplacements and a pre-First World War popgun. So it is no great surprise that the National Park offices are in an ex-MOD property; although to look at it I would have said wealthy Victorian industrialist or Lord Mayor‘s house, definitely admin and command not plain barracks.

As I come down to the quayside at Pembroke Dock I suddenly realise that the houses, which I had been passing by as a standard Victorian terrace, are in fact all slightly different.  While now mostly rendered, this appears to be a classic waterside accretion of cottages, even to the extent of a half-sized house being squashed into a gap, just like the ‘smallest house’ in Conwy.

A Martello tower stands very slightly out to sea at the corner of the walls of Pembroke Dock, with windows, which I assume are really for guns, facing in all directions. I don’t know whether this is for symmetry, for subjugating rioters or for denying invaders free passage even once they have landed.

On the walls of the naval dockyard are brass plaques commemorating different aspects of the history of the docks, from oil tanks burning in the Blitz to payday for the thousands of workers who were once employed here. 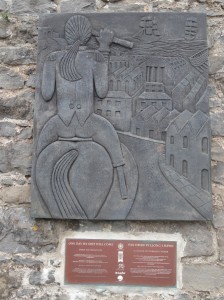 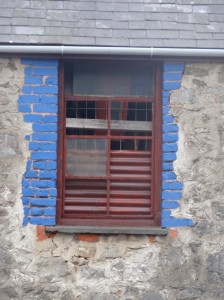 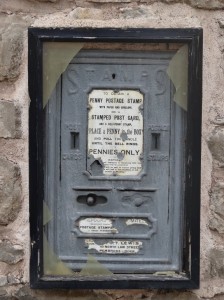 Following on up the road, the path cuts into more scrubby woodland before emerging at a fort that covers the top of the hill. Once a major garrison, it now stands derelict and fenced off. 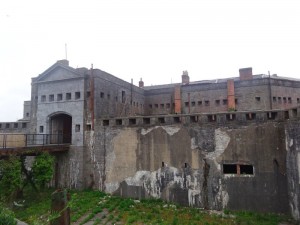 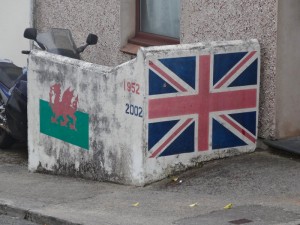 I wiggle through the back streets of Pembroke Dock and then find myself in a combination of open farmland, lanes and yet more scrubby woodland. Twice I missed signs, but did not go too far out of the way before realising. 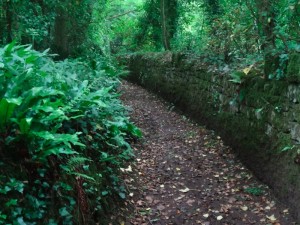 Going through a field of bullocks I’m reminded of ‘Walking Home‘, Simon Armitage‘s account of his walk down the Pennine Way, which I am reading at present. Armitage writes two lists during his preparation entitled ‘Not Afraid Of’ and ‘Afraid of’.  Under the former are bulls, but under the latter bullocks. I have discovered that bullocks are as timid as anything; if you even take a step towards them they disappear into the distance. However, there is something definitely spooky about the way they turn to watch you, and then gradually walk, almost in unison, towards you, like a four-legged zombie movie.

My only concern for safety with bullocks would be if there happened to be someone else coming the opposite way in a confined area (such as a clifftop path); the bullocks are so skittish the approach of a hiker can set them stampeding away … and I wouldn’t like to meet them coming from the opposite direction.

Eventually I emerge in the midst of a small estate above the shores of the Pembroke River and as I turn the bend in the road, Pembroke Castle appears, dominating the rivulet-creased, tidal river mouth. The path opposite the castle is clearly also tidal, from the pieces of seaweed strewn on it and the path-side sculptures. The bridge across the river here is also a tidal defence and river weir as the waters beyond are still, high and spreading, a swan gracefully sailing across the surface, in stark contrast to the sticky mud of the tidal-side, which is filled with an unreasonable number of abandoned oily-grey-coated bicycles.

I wonder at the old meaning of North Gate Street, ‘historically known as Darklin‘, but, it being too late for a search in the local archives, I opt instead for a half of one of the pump draught beers at the Royal George, and ringing for a taxi from Castle Cars to take me back to the van at Neyland. The driver is very knowledgeable about the Coast Path as a lot of their business is connected to it, including lots of baggage transfers. He tells me about the new route along old tank routes where it skirts the Castlemartin range.

It is too late to think about campsites or accommodation, so I head back through Pembroke and on to the coast, stopping at the car park at West Fairwater, where other campervans are also parked, and eat an Indian takeaway. It is not the best: the answer, "just five minutes", when I had asked how long to wait, should have given it away. The chicken seemed to have been microwaved to a leather-like texture before being mixed with the sauce. However, the glorious view of waves and the western horizon more than compensated.