words and WiFi at the Oriel y Parc, horses and lime kilns, surfers and mobility scooters

I decided to take a half day to catch up and do WiFi and just walk the eight miles from St Davids to Newgale this day; this will also mean I start the next day at Newgale where they do breakfast at the beach café! 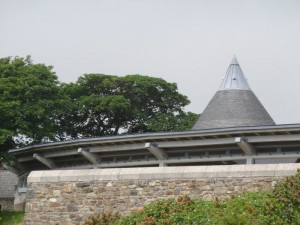 Not needing to set off until the afternoon means I can go to the Oriel y Parc for breakfast and WiFi.  Oriel y Parc is a tourist information centre, café and outpost of the National Museum of Wales, where they currently have an exhibition of paintings and photography. The building is built as a semicircle with grassed roof and a round tower rising above it.

As I go into the café, I look up to the wooden beams and see inscribed:

There is nothing like walking to get the feel of a country. A fine landscape is like a piece of music, it must be taken at the right tempo. Paul Scott Mower

This is obviously the right choice to go for breakfast!

Unlike the restaurant on Sunday night, the WiFi works flawlessly; although, to be fair, this is now school hours, so not competing with movie and music downloads. I finish my breakfast, move to another table where I can plug in the computer power and the time passes with my head buried in the laptop screen, until it is lunchtime, and surfacing for a moment from Flickr uploads and blog posts, I see the words

They are written on a bright red t-shirt, XXL at least, worn by a man who looks either trucker or biker, but anything but grumpy.

To justify my continued sitting and typing, I order another tea and toasted teacake, before, with all but one day’s photos uploaded to Flickr and recent blogs all up to date, I leave, later than I intended, to walk down the hill to the van and then on down to the sea edge for the afternoon’s walking.

On the path between Caerfai, where I am camping, just half a mile south of St Davids, and Solva, I pass more horses and ponies, a tiny blood-red-winged moth, kayakers, and various old quarry buildings. Then, beside the rocks, down at the shore, I see what looks like the ribbed carcass of a sea monster. It is clearly the rusting and decaying remnant of some piece of machinery for taking things up or down the cliff face, but now sits waiting for the slow caustic corrosion of salt and water and violent battering of storm-tossed waves to finally break the back of its skeletal remains.

Upper Solva is perched on the flat land above the cliffs and is clearly the ‘new’ town with houses looking mostly as if they have been built in the last 50 years.  In contrast Lower Solva sits at the head of the deep inlet, a natural harbour full of small boats. The footpath cuts down at the sea end of the inlet, and as it comes down to the first part of the quayside, by the old, but now disused, lifeboat station, there is the first example of a sign saying that one direction is not the Coast Path, but the path to the beach. 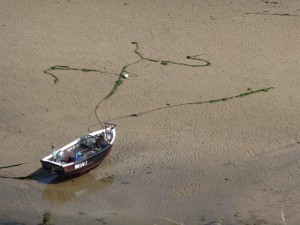 Next to the old lifeboat station is the Solva Boat Club.  Nearby are ‘Celtic‘ rowing boats. When I stayed at St Davids for a night last year, when preparing for the walk, I called in at Solva, hoping for breakfast, but the spacious car park was already near full as it was the day of a rowing race. Teams from all over were congregating to row in the sea. Back in Aberaeron, the lady at the tourist office said that she had just taken up rowing again after many years and was soon to take part in a twenty-mile race in Milford Haven. They have a team of six: four rowing, one coxing and one resting, then periodically rotate the positions.

Above the boat club is the Café on the Quay, where I break for a tea and toasted tea bread.

On the next table I overhear a conversation about mobility scooters and the hill up from Lower Solva to Upper Solva; one lady proudly tells how she drove up the other day, even though at the steepest point her scooter made struggling noises, but then one of the men tells how another woman, a mutual friend, fell backwards when her scooter tumbled where the way was so steep.

I often worry that software developers unconsciously assume Silicon Valley connectivity is the norm; clearly the same is true for mobility scooter manufacturers, based in flatter areas of the country. 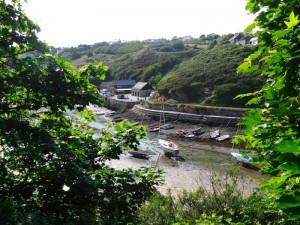 Later I talk to the proprietor who wonders how I manage with buses and things. She says she tends to drive to a place, walk and get the bus. One of the waitresses also asks about the walk and, it turns out, is studying Law and German at Cardiff University.

As I take the path out of Newgale the sign says ‘Newgale 5 1/2 miles’, the other estimates I’ve seen say four, but distance on the coastal path is difficult, partly because the path itself is so twisty at so many scales, and partly because what you mean by ‘Newgale‘ varies: the Sands Café when you first get to the beach, or the Pebbles Café at the far end?  It is interesting that something that is apparently as factual as ‘distance’ is itself a matter of debate and interpretation.

As with just about every tiny cove along the coast, Solva has lime kilns, but it must have served quite a large area of farmland in its hinterland, as it has four substantial kilns. The path takes you to the top of them, but if the tide is low you can cut across the sand. 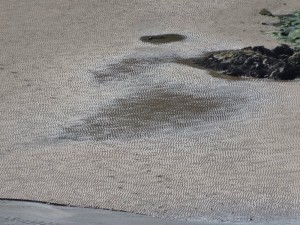 The path is relatively easy underfoot, but boy does it go up and down. I think the rock here has soft patches where valleys cut inland, so you go steeply down, then steeply up again; often steps are cut into the rock and soil to help.

Newgale itself is really not much more than a few beach shops and cafés, a pub (the Duke of Edinburgh), and a wide surfing beach facing directly out to the Atlantic. You cross a bridge over a small river, which, like so many others along this coast, is trapped behind a high storm-tossed pebble bar. Some have forced themselves an opening, but this one simply ducks under the pebbles to re-emerge below the bar at the sand line. 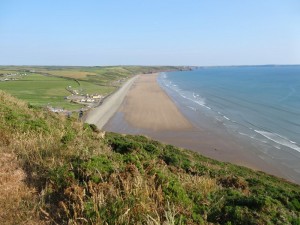 Coming over the bar are two youths manhandling a couple of kayaks and a black and white Newfoundland.  The Newfoundland decides it does not want to come down the steep pebbles and lies down on top, taking all of the lad’s strength to drag him up to his feet and then down the slope. We talk about dogs, and in particular the problem of controlling large ones. The lad with the Newfoundland was on holiday, but the other one was local, doing work experience at the surf school. I recall doing work experience at school (a new thing at that time); it was with the Post Office at their offices in Cardiff, using a punch tape terminal to connect to a LEO mainframe. I dearly love the Post Office, but punch tape versus surf school, something tells me that I didn’t get the best deal.

Whether the distance was four miles or five and a half, I don’t know, but I got to the Duke of Edinburgh with time to sit for a while waiting for the bus :-).