a short day to start the second half, an ice cream parlour and quay-side bistro, a steam railway and a surreal village 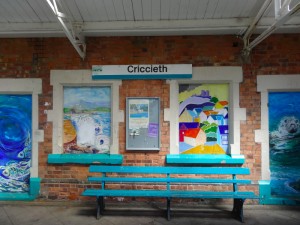 I come into Criccieth off the train from Porthmadog, there are not many trains a day, so it is definitely worth getting your timing right, but there are also buses.

Criccieth is a traditional seaside town, not of the Blackpool variety with wall to wall slot machines, but seaside guesthouses, prom, small cafés, which are clearly doing well, but do not appear ‘gentrified’.  Indeed maybe not so different now than in its Victorian heyday.

The castle dominates the town, you can see why it was built there, with sea cliffs and steep ascents to landward.  Unlike the other castles of North Wales this was built by the Welsh rather than built by the Normans to subjugate the Welsh.  However, after Edward 1‘s successful campaign in Wales, Criccieth fell to the English and remained that way until Owain Glyndŵr‘s glorious rebellion when the castle fell to siege aided by French and Irish ships. 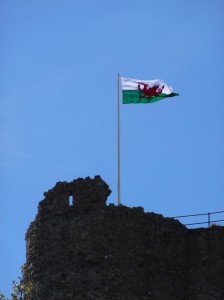 Just below the castle is Cadwaladers Ice Cream shop.  I’m not sure how widely it is sold, but I certainly saw signs in cafés in Porthmadog saying ‘serves Cadwaladers‘.  After a little investigating amongst the staff, they thought it had been operating since the 1950s or maybe early 1960s, but looking at their web site it is 1927. Seeing the little shop reminded me of Thayers in South Wales.

Nowadays {{Thayers} is sold over a large area and has a factory, but when I was little it was served in only two places, a little kiosk on Penarth Pier and their shop in Wellfield Road, the next street to Bangor Street where I lived. From the back bedroom of our house, you could just see the dull-green-painted, two-storey building in the back yard of the shop which was where the Ice Cream was made until production moved to the factory in 1966. 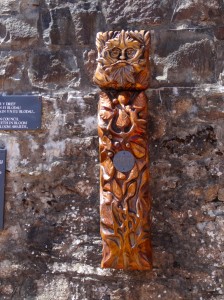 I think they may have had Italian connections, but it is not like Italian ice cream, much lighter and milkier rather than thick creamy.  Gelato is good, especially stracciatella, but to my mind never as good as Thayers.  Their signature ice was plain dairy, which was pure white, and had no discernible vanilla flavour, and this in the days of virtually luminous yellow Wall’s and Lyons Maid vanilla ice cream blocks.  But they also served orange ice cream, not sorbet, which they made later, but ice cream.  You could eat in at the shop, take a cone, or buy blocks of ice cream to take home to either have in a bowl or cut in slices to eat between two rectangular wafers.

Cadwaladers signature ice cream is vanilla, but a very subtle one, virtually pure white. Of course, nothing can ever match Thayers for me, although nowadays it is not hard to find locally produced dairy ice creams sold in most areas of the country. However, Cadwaladers was very good ice cream :-). 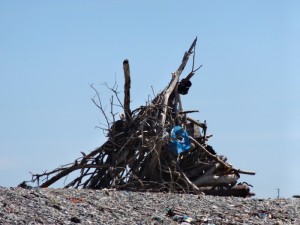 I walk out of Criccieth along the beach (eating my ice cream). The formal Coast Path runs on a path the far side of the railway, but crosses over and mounts the headland just at the end of the beach. Maybe the beach route is inaccessible in parts at high tide, but today the sand stretches all the way to Black Rock.  You can almost go round Black Rock by clambering over the rocks, but the water the other side is just a little too deep for wading, at least chest height, so I follow the Coast Path along increasingly high and precipitous cliff and then inland, just a half a mile or so, before coming back down to Black Rock sands the other side of a campsite. On the way I pass a couple, and we stop for a few moments’ chat, where it turns out the man had just finished a Land’s End to John O’Groats cycle ride in the last few weeks.

Black Rock sands is wonderful, a mile and half of open sands, backed by dunes, hills and Snowdonia beyond, and looking across the estuary to Harlech and the Cader Idris range.  The sand is firm, so cars are parked and maybe in high summer it will be too busy, but today, even with all the sunshine, not densely parked. 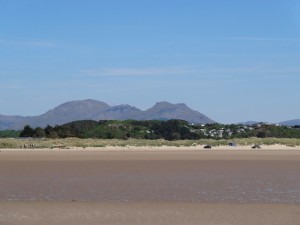 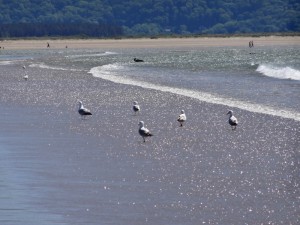 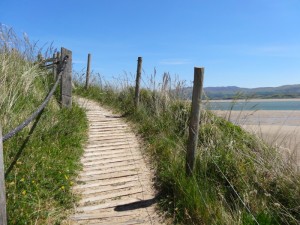 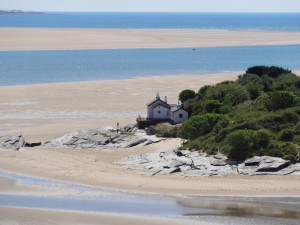 Wandering along the water’s edge alongside pottering gulls, I wonder if I can wade across to the Harlech side, but then realise that I have simply waded a little tributary and the larger river runs close to the other side, so I follow the path of the end of the beach, and along a cliff path toward Porthmadog.

Coming into Borth-y-Gest, just before Porthmadog, I pass St Cyngar’s Church, a solid grey stone church, I guess made from the quarry on the far side of the Ffestiniog railway causeway.  A man sits in the churchyard; he tells me how his parents’ ashes came to be scattered here. Although his parents came from England, his sister married a Welshman and hence they ended up here. The church is so small, he said, that the coffin needed to be spun round to get down the aisle.  But it is clearly a lovely spot to be remembered at, looking out over the sea and mountains.

The Moorings Bistro I will pass soon is run by his nephew and his French-Canadian wife. "Tell them you’ve been talking to Steve‘s Uncle Tom," he said.

So, I do visit there for lunch and it is a lovely place … they even serve drinks in traditional dimpled pint mugs.  Evidently, one of Jamie Oliver‘s cafés serves using miniature half-pint versions, so rather than being the old man’s glass, they are now trendy!

I see the bistro is for sale, so if you fancy a change of life … 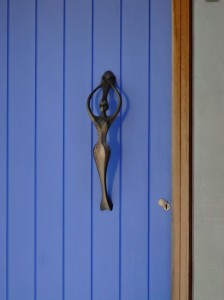 Porthmadog itself is more port than seaside, but also has that old market town feel, with traditional shops in the centre, and it is one of the stops on the Ffestiniog Railway where you can take a narrow gauge steam train up the Vale of Ffestiniog.  I see that the Coliseum Cinema is under threat and with a community group working to keep it open. As a child on seaside holidays, a trip to the cinema, the old time music hall or theatre, was one of the holiday treats.  With DVDs in holiday accommodation, and expectations of multiplex choice and seating, it must be hard to compete.

In Oban, where you get the ferry to Tiree, the cinema closed, but has been re-opened as a community enterprise, and so far, I believe, is being successful.  The tiny community-run Ringside Cinema on Tiree won a popular vote for funding for its innovative dual use of the cattle sale ring as a cinema; however it ultimately failed to attract sufficient numbers for regular screenings. This was partly because the cost of film hire means a small cinema cannot screen the ‘just released’ blockbuster, but it is also simply a matter of scale.

On an island of 750 people the number of people who can go out on a particular evening and are interested in a particular film is always bound to be small. In fact this is also true of the big city multiplexes; if you go to a film on any night, except the first few post-release nights, you find the auditorium virtually empty, it is just there are a lot of auditoria for the number of staff. It would be interesting to see the financial books of these large cinemas; I would guess that the benefits of having multiple screens reduces the per-customer costs sufficiently to make it break even, but the profits come from those few first screening nights, which a small cinema cannot afford.

For the seaside town cinema, the secret for sustainability must be to make the most of the complete ‘experience’, maybe making a virtue of the olde-worlde-ness of the venue, whilst offering more modern comfortable seating inside. 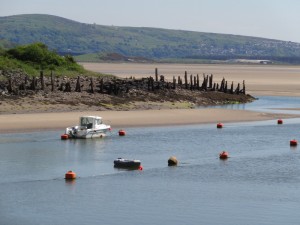 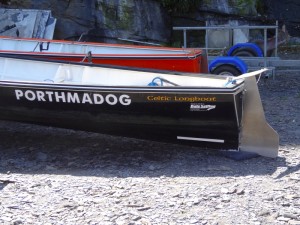 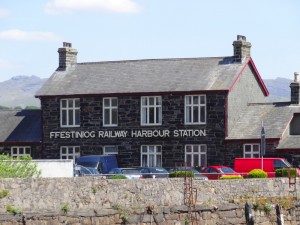 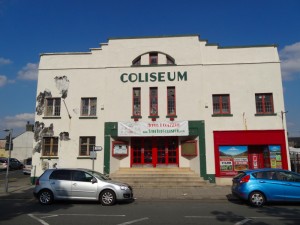 The walk from Criccieth was only short, as the previous day had been longer than I’d originally intended, but the latish start to sync with the late morning train meant I didn’t have time for a full day.  However, I decided to go on the extra few miles to Penrhyndeudraeth, starting up the Vale of Festiniog, where you have to cut five miles inland to the first river crossing at Maentwrog as the toll bridge below Penrhyndeudraeth does not take pedestrians. The bridge is in the process of being upgraded, so I hope this includes a pedestrian footway to shorten the route for future years.

The short way between Porthmadog and Penrhyndeudraeth takes you over the causeway carrying the Ffestiniog railway and old road, with what look like wildlife-rich marshlands behind.  Once upon a time the causeway will have destroyed the previous tidal estuary ecosystem, but a new one has taken its place. The path also takes you just past Portmeirion (but not into, you have to pay for that!), the surreal Latinate village, home of ‘The Prisoner‘ and flowery pottery.

Penrhyndeudraeth itself became the UK’s ‘first networked village’ in 1998, delivering internet access in a rural location, and then a few years later upgrading this using wireless links, rather like Tiree Broadband does on Tiree.

2 thoughts on “Day 51 – Criccieth to Porthmadog”