shifting sands and an iron man, coin studded trunks, bright painted huts, and I get to half way,

Abersoch definitely looked more inviting on a sunny morning, despite finding that I’d packed the room key in my trouser pocket after the taxi had left with my bags. The Angorfa is organised very efficiently as a morning-only business, with the night time ‘check-in’ via an entrance code and the breakfast room open as a breakfast bar. I ask Andy, one of the owners, about the afternoon, "we’ll be on the beach".  Whereas many B&Bs are run by retirees, after a small extra income and sometimes simply company, this is a different style, very much an efficient business, with a single purpose, to allow the owners to live by a surf beach.

This reminds me of Polly and Duncan on Tiree.  They have moved the other way: whereas they used to run both a B&B and evening restaurant, they are turning the B&B into self-catering and focusing on the restaurant. There seem to be important lessons here about finding ways to combine work and life. 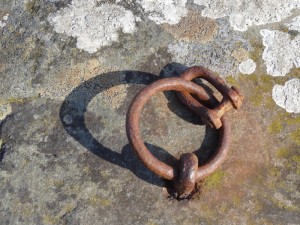 In some ways the Angorfa system is a little impersonal, but knowing that I have a keycode, rather than disturb the landlady, was welcome the night before when it was nearly 9pm when I arrived in Abersoch.  In many ways like the MorphPOD experience.  I have been staying in a lot of B&Bs and for the purposes of the walk, I often learn a lot from chatting to the owners. However, if travelling with Fiona for pleasure, we usually prefer a Travelodge, Days Inn, or other roadside motel, for the ease of late night check-in and, to be honest, the less personal, but slightly more private feel.

When in Tudweiliog, I had discussed the changing tastes of seaside tourism. Expectations are high, and many small one- or two-bedroom B&Bs do not have en-suite bedrooms; on its own this is enough to rule them out for many, especially younger, visitors. It is odd really, with couch surfing on the rise, this contrast between personal and impersonal travel, privacy and openness.  I guess too, despite health recommendations, breakfast is becoming a meal of the past, especially on holiday, and especially if it comes at fixed times of day. Many prefer the flexibility of self-catering … and, again to be honest, when not ‘on a mission’ I would be the same.

It is also surprisingly hard to find basic B&Bs in the internet age. The slightly larger, slightly more organised ones are net-savvy, manage their online presence, and make sure they are well represented on TripAdvisor.  But these are the slightly more expensive ones. The simple £25–30 B&B is almost impossible to find unless you are on the ground. Paul used to work at the council and in his current business often works closely with local council tourism. He explained some of the problems to me.

When I was a child we would write (!) to the local Tourist Board, who would have a list of local B&Bs. But now, with everything online, these smaller B&Bs, often with older owners, are a ‘problem’. They may not manage email efficiently, may not keep their online availability up to date (if they access the web at all), are less likely to have a mobile phone for last-minute queries, and may not have all the facilities expected (TV in each room, en-suite, etc.).  Understandably, the tourism office drops them from their lists, which means they do not get visitors, and ultimately the number reduces.

Thinking about affordable tourism, this is a disaster.

As I walk back towards the harbour a man sitting outside a café greets me. It is the same man who had been helpful when I was finding my way through town the night before. He checks that I found the B&B and food OK. Strange how much nicer Abersoch feels in the morning sunshine rather than tired at the end of the day.

The marina at {{Abersoch} is really the outflow of a small river, I pass new yuppie boats and rotting hulks, then cross the river on the road while a swan passes through tidal flood gates.  These are small compared with the vast flood defences on the Severn or on the coasts of North Wales and Anglesey, but still a reminder that the sea is ever a threat as well as a source of tourist income. 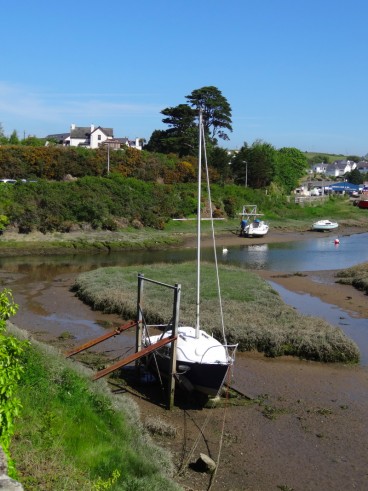 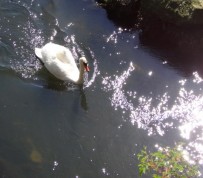 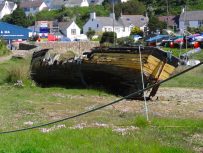 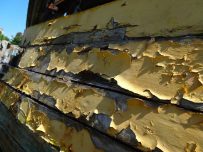 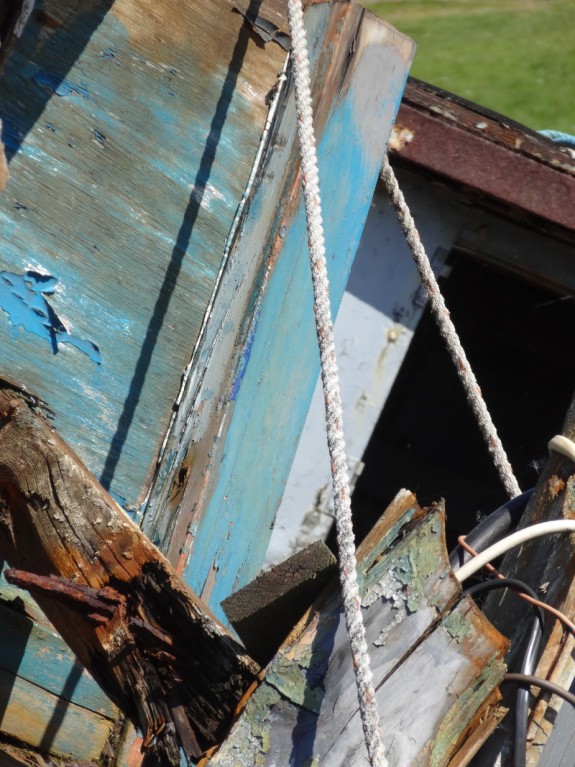 Down to the beach past a few eco-houses and then, about a mile north-east of Abersoch, a small township of static caravans. Here the threat seems to be less the sea itself and more the sand that seeks to bury the wooden steps that lead down to the beach. A JCB is digging sand out from around the steps and then spreading it out along the shoreline. I am guessing that this is an annual early season job after winter storms.

Following the way through these caravan sites always feels a bit like the Minotaur maze, but a helpful gentleman points me in the right direction, past the red house and then cutting diagonally up the slops of Mynydd Tir-y-cwmwd, the 400-foot headland that separates the sands east of Abersoch from another long beach that stretches from Llanbedrog to Pwllheli. 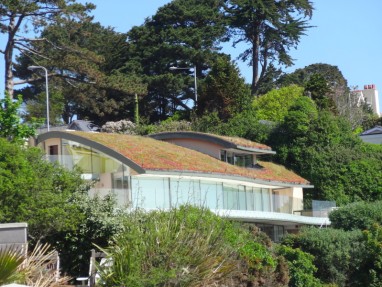 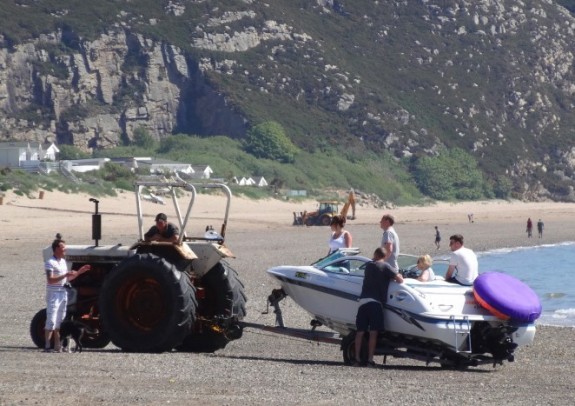 From the headland you can see the coast ahead, Pwllheli itself partially hidden by a sandbar partway, and then Llanbedrog itself appears, or rather not the village itself, but the brightly coloured beach huts strung along the sand, rather like at Abersoch, but of a slightly more modest variety.

However, before coming into Llanbedrog, partway down the headland, a rust-red iron-cage of a man stands guard on a rocky outcry; somewhere between Gormley‘s ‘Another Place‘, Wicker Man, and a medieval instrument of torture.

I end up staying there more than 20 minutes, first of all trading stories about sandals and footwear with a small family group and then chatting to a gentleman who seems to know a lot about the history of both this statue and the previous version, which had rusted away before being replaced with the current version. I have found a local web page with a picture of the former iron/tin man which reminds me of the robot from ‘The Day the Earth Stood Still‘. This itself was a replacement for an earlier ship’s figurehead, which was vandalised in the 1970s.

Beyond the Tin Man the path cuts on down the headland, past several tree stumps densely embedded with coins, each edge in, hammered, I assume with stones, for luck.  Who was the first person to do this and why?

I must have cut slightly more steeply down to the beach than I should have as at first I couldn’t see the next Coast Path sign, asked the tourist information man who half knew, and then saw a sign.  I think the proper path takes you on a more gentle line a few hundred yards inland and then back down to the sea, whereas I’d taken the path straight down.

In Llanbedrog, as well as the wonderful line of beach huts, there is a public toilet and a beach café that seemed to serve sea food at reasonable prices. I have a feeling that the demographic of the Llanbedrog visitor is slightly different from that of Abersoch. 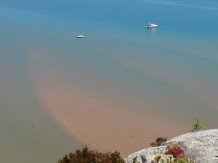 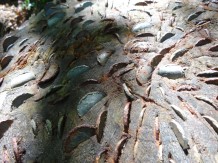 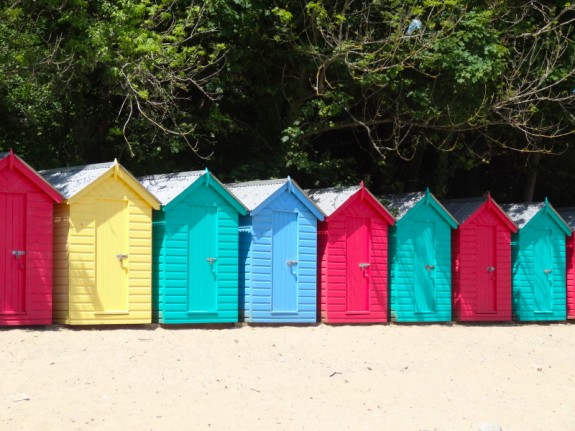 From Llanbedrog to Pwllheli is a straightforward walk, sometimes along the beach itself, sometimes along a grassy track behind the shingle. The final half mile is along the edge of a golf course unit; Pwllheli esplanade appears ahead, a terrace of beach-front houses, of a style that eludes me, I assume very early 19th century three-storey apartments.

The Coast Path cuts past municipal buildings and an Eisteddfod stone circle (these will so confuse future archaeologists).

I cannot now recall what I ate this day, as I know I didn’t  stop in Llanbedrog, and don’t recall finding a sandwich bar on the waterside of Pwllheli.  I certainly did not have time to investigate further into Pwllheli as I was due to meet Paul at Criccieth. 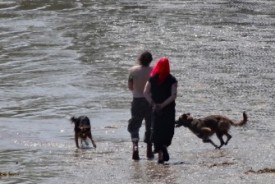 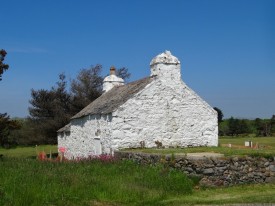 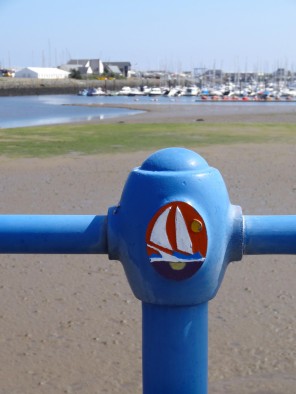 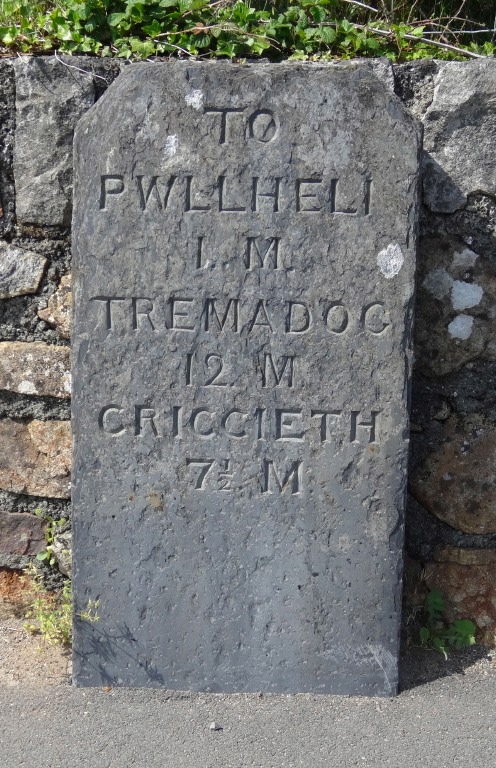 There is a short inland section past Pwllheli, about a mile and half along a busy road before cutting back to the sea. From the map it seems that it is possible to follow the shoreline along, as long as the tide is not too high, but the railway separates the shore from the road and so if there is any barrier you would be stuck; so I stick to the official path. After a mile or so actually on the shore, there is another small headland, before the final run of coast towards Criccieth.

Beyond the headland there is another stretch beside the busy A497, and so, when I meet a man walking on the headland I ask him if it is possible to stick to the beach. I can see that there is a small river halfway along, but from the map you cannot tell if the river can be waded.  He tells me it is possible, but is a little doubtful. If I follow the sands and then get stuck it will be a very long way back, so in the end I stick again to the official Coast Path route, albeit not entirely pleasant.

This time, I am glad that I did so.  When I do eventually follow the path along the edge of the small river to the shingle beach, it is clear that it would require at very least chest-high wading, although the tide was quite high, so maybe at a different time of day it would be possible.

From here it is simply a mile along the shore to Criccieth, where I go to the small hotel nestled below the castle to meet Paul. 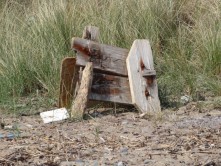 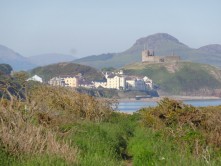 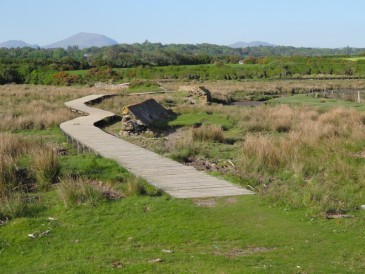 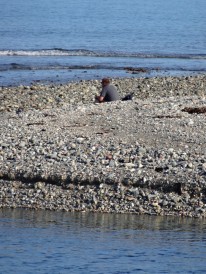 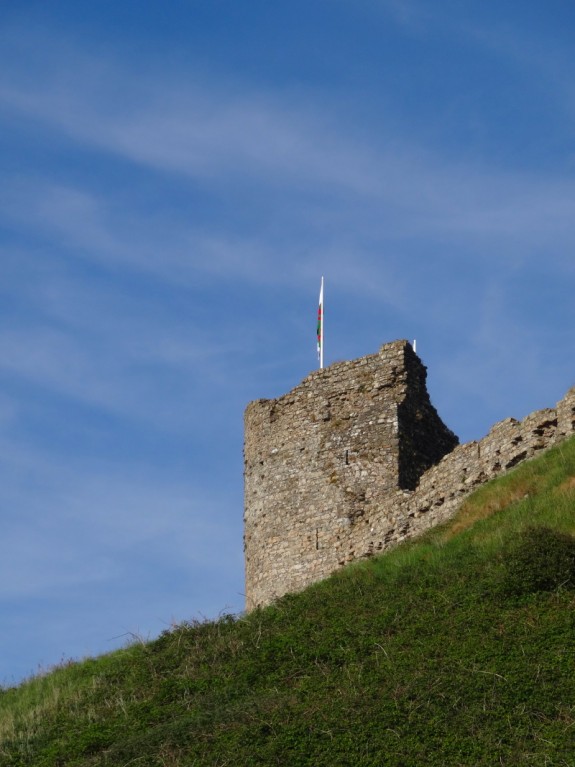