A tale of two visits, from independence to dependence a path we all take, redefining ageing, and challenging spirituality.

As the day started with pouring rain, I was not disappointed to miss a day’s walking. Keith Albans picked me up and we headed to Rhos-on-Sea for breakfast at an ice cream shop and café opposite the sea front (but no ice cream with breakfast). Keith is chief chaplain at the MHA, which is one of the charities I am supporting through the walk.

Originally MHA was an acronym for ‘Methodist Homes for the Aged‘, but now, like BP and ICI, it is simply ‘MHA‘. The original name became inappropriate as, over the years, it has taken on homes and schemes that do not have Methodist roots, and residents have many denominational, non-denominational or non-religious backgrounds. However, the MHA ethos still includes a belief in spiritual as well as practical and social care, hence an active chaplaincy throughout all homes.

MHA has facilities varying from high-dependency homes for those with advanced states of dementia who can no longer live independently, to schemes to help the elderly remain in their own homes. We visited two quite different places at near opposite ends of this dimension.

The first, Adlington House, consists of apartments for fully independent living, some rented, but mostly owned by residents. However, the fees include a ‘care package’ with a full-time staffed office as well as communal lounge and bistro (also open to the public), where we later ate lunch (I had local Conwy sausage and mash!)

Chloe, the manager, welcomed us and took us to meet three of the residents. We talked a bit about the walk and why I’m doing it, and also some of the tracking technology I’m carrying in the light of the way various kinds of monitoring and tracking are being trialled for elderly people.

I recalled the story I heard once in Dundee, about an elderly lady whose children began to feel worried as she became withdrawn and confused. The problem, it turned out, was technological, not mental. There were sensors in the flat that ‘spoke’ based on rules, "Are you OK, Mrs Jones?", "Pull the cord if you need help." … In order to make them more ‘user friendly’, the automated system used words recorded by members of the family. However, the system only came into operation at night. I’m sure this was explained at some stage, but I’d guess at the same time as many other features in the accommodation. So, the lady would wake in the night, get up to go to the toilet, and start to hear the voices of her children. She thought she was getting the first signs of Alzheimer’s and hence her depression. The technology was explained again and the problem went away.

The residents had very different approaches to technology. Two were resistant to all technology, except mobile phones, but the third used Skype heavily to keep in contact with family. The common feature, as found by others when studying technology use by older people, is that it is used if it is perceived to be useful, but not for its own sake. Of course this usefulness is fast becoming necessity, and over lunch we wondered whether, in the future, there may be a need for local technology experts, like the Skype-lady, who can help others. I was also reminded of my old idea of the electronic village shop, where the shopkeeper can help customers find their way round the online world, ‘Mrs Goggins as information scientist’.

The residents of Adlington House vary from early 60s to late 80s, but are mostly, at this point, fully able to look after themselves. Over lunch we discussed some of the changes that will happen over the next five to ten years. On the one hand residents will age and care needs change, although the term ‘care’ itself is problematic; but also there will be an increasing expectation or desire for working life to extend into late 60s or 70s. Should dedicated housing schemes like this consider work as part of the support package, maybe supplying hot-desking, or perhaps attempting to create employment opportunities?

We also talked about the way this housing facility fitted into the larger MHA portfolio. MHA is a charity whose mission is to support all as they age, but it also has to be financially sustainable, not all of which can come from charitable collecting as I am doing during the walk. So, like housing associations, the rents or, in the case of leasehold apartments like those at Adlington House, purchase prices, have to reflect costs.

MHA, like similar charities and not-for-profit organisations, are faced with a tension. On the one hand they need to be financially sustainable in order to expand their provision for an ageing population; on the other they wish to maintain access for all. While some of this is helped by government in the form of housing benefits and other allowances, these benefits are also under pressure. One of the residents showed Keith and me her apartment, which included a spare room for when her children visit. If she wished to claim housing benefit, she would be penalised for having the extra room, the so-called ‘bedroom tax’.

Hopefully, charitable donations, such as those related to this walk (have you given yet?) can help ease some of this tension, but, as demand grows and state support shrinks, the need can only increase. 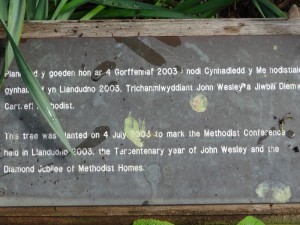 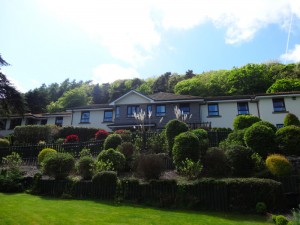 After lunch, we visited Coed Craig in Colwyn Bay. This is on the heavy dependency side of MHA‘s activities, catering for severe dementia. Given this, it was not appropriate to talk with residents; however, it turned out that there was a meeting in progress for MHA chaplains in the region. For a while Keith and I simply sat in while they talked about resident satisfaction surveys and values assessments, but then the discussion turned to the walk.

We talked partly about church buildings, the many I have passed that have closed, but also the churches up Offa’s Dyke that offer free refreshments to walkers, the ministry of hospitality. One of them asks me whether the walk has a spiritual dimension. I fudge a little; there is definitely a sense of pilgrimage, but where the pilgrimage of Welsh identity and the pilgrimage of personal spirituality start and stop is hard to define. But on the table of my campervan is my copy of the Methodist Hymn Book, inscribed within in my Mum‘s handwriting:

Strangely, as a bookmark in the hymn book, I find the 1979–80 programme card of the Trinity Mathematical Society. There is no clean separation between Welshness and hymn singing (in my head I hear the rich bass tones of ‘Bread of heaven‘), between spirituality and mathematics.

But do I fudge my language, just as the simple statement of the missionary, "simply the Holy Spirit", challenged my more woolly, "happenstance or providence", when talking about the statistically improbable meetings I have had along the way? Should I be more direct in my words?

Over the years I have, on the one hand, become much more theologically ‘conservative’, in the sense that I have no doubt of the absolute, universal, and unique centrality of Jesus as saviour of all, and yet, on the other hand, much more ready to accept that there are many ways in which Jesus finds each separate person. But, in my desire to avoid offence, do I miss words that would help others in their own path to the One who welcomes all? 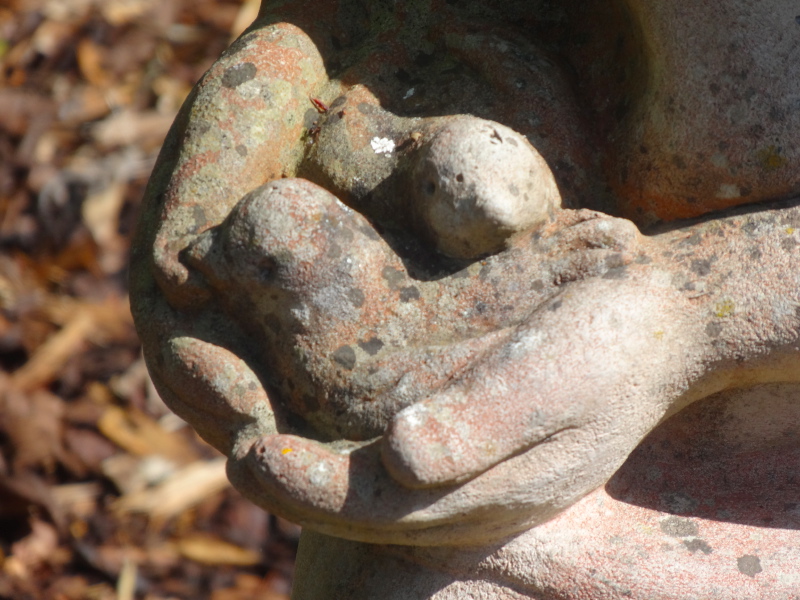