Good article “You can have too much precision” on Guardian Geography blog by Jack Stilgoe picking up similar themes to my recent blogs on maps and mapping:

“The search for precision is a defining feature of scientific reductionism. But as our maps and models become more sophisticated, there is a danger that we lose track of why we have them.”

The text starts off looking at maps, including the Borges 1-1 map, but then applies this to climate science asking whether exactitude is more important than communication. 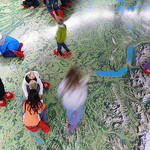 Incidentally, if you don’t know the Borges story, it is repeated in the above post and basically is about the end of geography in mythical land due to the desire for ever and ever more exact maps, that are eventually the same size as the land being mapped.  The story ends:

In the deserts of the west, there are tattered ruins of that map, inhabited by animals and beggars

I have often thought that this would make a wonderful art project1, to literally make ragged fragments of 1-1 map and leave them in the locations they represent.  Anyone care to join me in this sometime (after the walk!), something you do in different places, sort of distributed-flashmob-like.