One of my research interests is the connections between the digital and physical world, and I have just come across Band4Hope, which is both a lovely example of this and a wonderful project.

The idea is that you get a band with a unique ID encoded on it.  You then enter the code into the Band4Hope website and after a few days pass it on to someone else.  They do the same in turn.  Overtime you can track the band as it makes its way across the country or around the world.  Before you pass it on you are also encouraged to do some small act of kindness and record these at Actions4Hope so that a record of this also spreads around the world.

It is strange how things come together. Actions4Hope is a very different project, but also makes me think of One Million Lovely Letters that I blogged about recently (Wonder Women). Both are about making small but significant differences; big differences are made by many tiny acts and each act may make a big difference to those it affects. 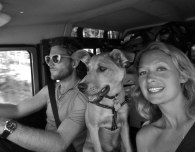 Band4Hope is a project of Lucie, Lachlan & BowWow (Vagabond Adventures) who travel the world in a Land Rover doing interesting and worthwhile things.  It reminds me a bit of my own idea as a teen to travel when I left school .. but with a trek cart full of my DIY tools and basically tramp doing the odd house repair for an old lady, small acts to improve things with minimal impact.  So, while things didn’t quite work out that way for me, maybe now my ‘tool chest’ is my computer.

I was also reminded of two people I met during my February travels: Leanne at dot.rural in Aberdeen and Dimitrios at Horizon in Nottingham.  Leanne’s PhD work (in architecture, before she was at dot.rural) looked at the lives of objects in the home (I hope I have got that right Leanne).  Dimitrios is nearer the beginning of his PhD journey, but also interested in objects and their digital traces.  It is one of several introductions that I have found myself making in connection with the Wales walk between people I had not encountered before. This includes two academics in different departments at Bangor who had never met.  It is as if my own intellectual and spatial travels are starting to make threads between people afar — very exciting.