and then we were five 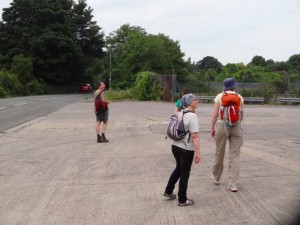 Clare Hooper had joined me in Penarth to walk with me today, so after a relaxed breakfast at the Premier Inn in Barry, we caught the train to Cadoxton two stops down the line.  There Fiona, Janet and Ted were waiting for us.  I hadn’t known Ted would be there and it was wonderful to see him, he had met me briefly on my first day’s walking and had come again to join me near the end.

I displayed my superior navigational skills to the assembled masses, by confidently leading us down into the subway to the next platform, but quickly corrected this to the pathway down to the road and join the coastal path.

By walking to Cadoxton the morning before I had cut out some of the road walking, but there was another mile or so through town streets and past a chemical plant.  Ted works for the company that runs the plant and explained that the towers were the tallest in, and now my memory fails me, certainly the UK, maybe Europe.  The plant is shut down at present for annual maintenance.  Ted explains that it is better to have a single scheduled maintenance period, than risk closures while in operation. 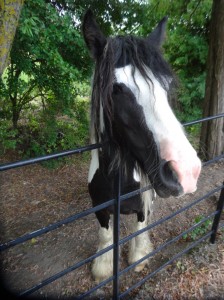 As we walk past the plant, on the one side small horses rush up in the hope that we have something to eat, but as a warning against their importunate nuzzling a sign reads:

The kerbstones proudly announce that they are not stone, but instead, “Enviro-Kerb. The recycled composite curb drainage.”

Eventually, we reach the sea, sadly Cardiff-side of the dinosaur footprints.  Later we meet a local man, Linus, who told us that there were alternate ways through the docks which allowed you to walk more of the coats, but the port authority had resisted the Wales Coast Path leading through the docks.

As we look down the coast Sully Island, joined to the mainland at low tide, already looks close, and Steepholm, which has been visible for some days, is less indistinct although still some way off in the middle of the Bristol Channel.  As we walk, Flatholm appears, apparently between Sully Island and the mainland, although in reality much further away and further out to sea.  Both were fortified during the last war, and I’m sure there used to be day trips to Flatholm, although I never went. 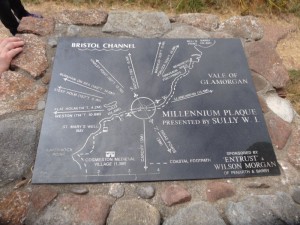 We met Linus a little way along the coast at Sully, after the path had passed in front of some houses, a playing field and then some more houses, and appeared to be about to cut inland.  We knew there was a short zig-zag inland coming up, so we almost followed the road.  Happily, Linus saw us and pointed out that from the other direction the coast path arrow appeared to point to the sea.  In fact the post had been removed and reinstalled as part of some building work and the builders had put it back the wrong way round.

A short way after we got to the point where the path really did do its little zig-zag, along the edge of a small field, where the diminutive coast path roundel would have been all but invisible if not for a large sign that said, “End of the Footpath”, with an arrow pointing the way to go, just beyond which we found the ‘Captain’s Wife‘ where we stopped for lunch — indeed, the only eating place in the ten miles between Barry and Penarth. 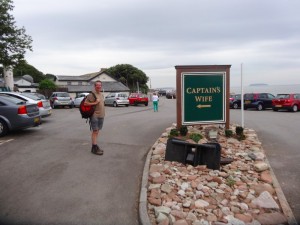 The story is that the ‘Captain‘ who lived there kept the body of his wife in a box after she died.  Some time afterwards thieves broke in and, thinking it a treasure chest, stole the locked box.  The story ends there and we are left to imagine the distress of the Captain (although I’m sure modern counsellors would see it as a way to ‘move on’) and the shock of the burglars when they opened the box.

Just beside the Captain’s Wife is the clubhouse for Swanbridge caravan site.  When we had one of those ‘what did you do over the weekend’ sessions, one of the boys in my class  at junior school, used to talk a lot about going to their caravan (a bit of social one-up-man-ship), I thought at ‘Swanage‘ … a bit of a long drive for the weekend.  I have a feeling I had realised my mistake in the past and then forgot again, and it was only when I looked at the map in recent days that I realised it had been ‘Swanbridge‘, just a few miles from Cardiff.

While we started our lunches (they had real toad-in-the-hole), the rain started, and poured.  Everyone who had been eating and drinking outside rushed inside, and whether it was the swelling numbers, but the efficiency plummeted in Fawlty-esque fashion.  On the menu there was a coffee plus a mini-pudding option, but the coffee machine was broken.

“No problem, we wanted tea with it anyway,” we said.

But the waitress replied, “we have no hot water either.” 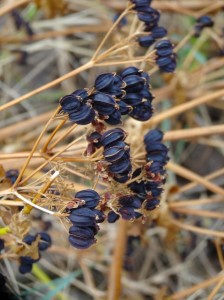 We assumed this meant that they normally make tea using the hot water from the coffee machine, but felt it surely was not beyond the bounds of culinary possibility to boil water on a stove.

A little later the waitress returned to explain that the brulée torch was not working.

Happily, the puddings that were available were nice, and as we finished them there was no further excuse not to go out into the wet.  At this point Ted had to leave us to go back to his car in Cadoxton, it had been lovely to have him with us and to compare notes with his own walk round Wales, in stages, twenty years ago.

The cliff walk had to divert down a small lane and then across fields to avoid a small caravan park.  The soil from the fields, newly wetted upon a dusty, dry and cracked surface, clung damply to our boot, sandals, feet and trousers; each step made us taller until our footwear resembled 1970s platform boots, and we attempted to scrape off the clinging mud on every sharp corner of wood or stone we could find. 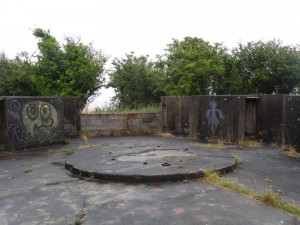 Back on the cliff-top path, not quite as clingy as the field mud, we found ourselves at a substantial WW2 anti-aircraft gun emplacement, the concrete bases, and old metal door and gun fixing points all that remains of a time when Luftwaffe bombs rained on the strategically essential docks.  I recall Mum told me tales of the excitement when a food boat docked raising hopes of luxuries such as bananas.

For a while a section of WW2 concrete path also helped us on our way.

We pass the ‘Marconi Holiday Village‘.  This is the site where Marconi sent the first radio message across the sea from Lavernock Point to Grassholm.  The holiday village sign was the only reminder of this historic event.  Where is the information board at least? 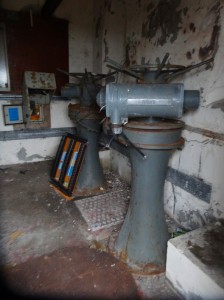 Along the way is a small castellated building with an entrance, partially boarded up with broken plywood.  Inside the remnants of electrical equipment cling to the walls and two huge grey valves suggest some underground water course, maybe sewerage or maybe fresh.

And then, very soon, the first glimpses of Penarth Pier and Cardiff Bay through the trees, before we come to open parkland in front of expensive sea-view houses, the old metal cliff top railing, backed by a new post and wire fence where the cliff is clearly becoming unstable.  Here, as in so many places, the ever-shifting nature of the coast is evident.

The Pier, which dominates the view, would once have been a place for day-trips and ferries across the channel towards Weston-super-Mare.  Indeed I recall once as a child going on a trip almost all the way across, but not landing.  Maybe even then the Weston end pier was not in service, and I’m not even sure whether the trip went from Penarth, or Cardiff Docks. 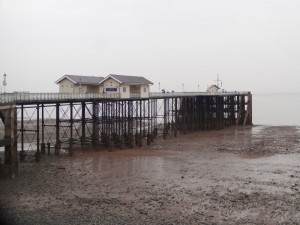 Past the park-side bistro (also the place to go if you wish to pay for golf putting), we drop down the road to the Penarth prom, which has building work for new apartments, but otherwise is surprisingly like I recall it from forty years back.

However, at the pier I did have the disappointment I had been steeling myself for.  The Thayers kiosk has gone.  The girl at the current pier-end kiosk explained that Thayers had gone into administration and been swallowed up into a parent company.

So, then up into town to the rail station to have a quick cuppa and cake at Foxy’s Deli  before Clare‘s train back to Southampton and Janet being picked up by Rachel, who dropped Fiona and I at the Pier Hotel where we spend the night looking out on the typical South-Walian rain-greyed sea.