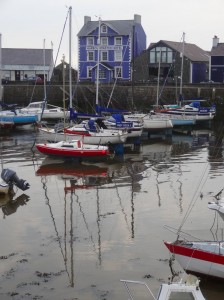 Really, as it says on the can, a day spent at Aberaeron trying to catch up a bit, and make the most of the WiFi and the Monachty, the pub overlooking the footbridge over the harbour. I did some writing, but about half the day I spent sorting receipts and failing to find them all, as I urgently need to do claims for CHI and other work trips back in April.

It is harder to see Aberaeron than some places because I already know it well. We never spent any protracted period here, but several times visited with children in our old VW campervan, and, after they had grown up, I stayed here with Fiona in our Transit-based campervan.  In recent years, when I’ve been staying at Birmingham over a weekend, I have occasionally ‘popped’ over for a night or two at a weekend – living on Tiree, a day and a half’s travel from Birmingham, the three and a half hour drive over the Welsh mountains feels like an evening jaunt.

We have always stayed at the Aeron Coast Caravan Park, which is just at the edge of the town, though never more than two or three nights, so it is familiar: the walk along the prom and quayside from campsite to town; the wonderful New Celtic Restaurant – fish and chip shop, ice cream, breakfasts and meals as well; the Hive on the Quay – fishmonger, restaurant and seller of honey ice cream; and the little craft village on the edge of town.

Aberaeron‘s beaches are all stony, the only real sand is the silt river sand in the harbour at low tide. So this is not bucket and spade seaside, but is a popular tourist site, not least because of the picture postcard lines of Georgian houses overlooking the harbour.  A peek at the prices in the local estate agents will tell you that when one of these prime properties comes on the market, the price is not aimed at local fishermen.

The harbour that was once a major 19th century port is now filled with yachts and pleasure craft, mixed amongst the small fishing boats. From the size of the boats I assume the fishing is mostly shellfish, lobster, crabs, maybe shrimp, rather as on Tiree. However, the yachts are not overwhelming, or as densely packed as in some places, I guess the combination of the drive over the mountains, and the port opening directly into the Irish Sea does not attract the casual yuppie weekend yachtsman in the way the Solent or even the Menai Straits do.  Instead, the yachts are often homely, slightly weatherbeaten, not cocktail bars on water straight from the boat show, but real craft that have seen the sea. 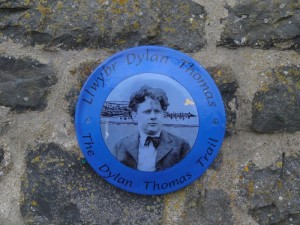 The visitors are clearly expected to be cultured as one of the major signpostings in the town is the Dylan Thomas Trail around the town, as he used to regularly visit Aberaeron, which he described as ‘the most precious place in the world‘. I hadn’t been expecting to see much about Dylan Thomas until I got to Laugharne.  In fact, I have learnt there are Dylan Thomas Trails across South and West Wales, although the Aberaeron part has not yet made it to the official Dylan Thomas web site’s West Wales Trail 🙁

However, neither tourists nor yachtsmen dominate the town. Even in mid-summer, you are as likely to hear Welsh as English, albeit with the odd Eastern European accent serving you.

This is still, as it was in days gone by, a market town. No out of town supermarket, or New Look, but a mix of food shops and bit-of-everything for home and farm, serving local villages of a small catchment area. It is only half an hour to Aberystwyth and Morrisons (labelled like a town of its own on the bus timetables), so probably not the place for a monthly stock-up, nor the ‘pop in for a tin of beans’ of the village shop, but more a weekly shopping and natter with friends in a tea shop place.

But inflation has hit Aberaeron, the pound shop is now a £1.20 shop.