from centre of power to centre of learning, up and down the hills and valleys, far from the sea, Roman Steps and old ways, a wild walk along beach and cliff and, no, don’t break the window 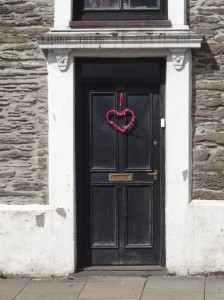 The path out of Machynlleth goes up the Roman Steps.  Given the ‘Roman Road‘ out of Aberdyfi is actually an early 19th century failed turnpike, I reserve judgement. The first section has concrete steps, reinforcing my scepticism, but then it turns into stone steps cut from the raw rock, but smoothed over many, many years. As I climb higher and the path flattens, it is still rock underfoot, and along the side, where tree roots leave a gap in the vegetation beside the path, it is clear that the grain of the rock lies upwards, the flat path and worn steps have been hewn with great effort.

Just as the day before, the road cuts directly along the estuary-side to the sea, but the coastal path has to cut inland over hills and up and down the valleys that feed into the Dyfi. However, it is clearly marked and mostly leads along lanes or forest paths, so is easy to follow. 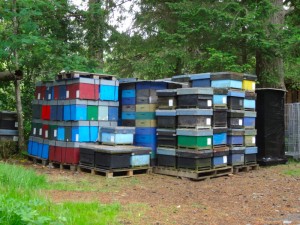 As the path leads down the Llyfnant Valley, I follow what at first seems to be a rough leaf- and mud-floored forest track.  However, as I look over the edge towards the river breaking in small cataracts below, I realise that there is a retaining wall, and that under the layer of leaves it is, in fact, like the Roman Steps, cut from the solid rock. Maybe this was a major route in the days before agricultural drainage and engineering advances made the current riverside road possible.  Or maybe it is a far older route.

The last section before the path heads towards the coast is from above Furnace to Tre’r-ddol.  This is mostly not marked as footpath on my 25,000 map, so must have been agreed and marked out specially for the Coast Path. There are many new kissing gates, and also – hushed silence – quite a few tall white-topped poles to help you find your way. Again, I saw no sign of the world ending or civilisation falling into ruin. 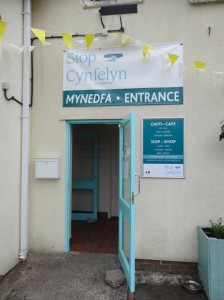 At Tre’r-ddol I was hoping to find a pub or café, and indeed found Siop Cynfelyn, a community shop and café. It has only been open six weeks, I feel so privileged to eat there :-).

At the next table a man has a t-shirt saying “Urban Saints” I wondered if it was a pop group or something, but he said that it is the new name for what used to be called ‘Crusaders‘.  I think the Crusades will maybe be reviewed more positively in the future, but for the time being I can see that ‘Crusader‘ is not the best image.

He tells me about the village where he lives, near Bala. The shop, post office and pub had closed and it seemed the heart had been taken away from the community.  However, they applied for funding from the Welsh Assembly and other bodies for a new community hall. Now many new activities are starting because there is now place to meet.

However, I also recall Eban saying that in his village, near Caernarfon I think, there was a similar story, people got together around creating a new village hall, which is hardly used.

The difference may be because the Urban Saints‘ village is more isolated, whereas Eban‘s village has easy links to Bangor and Caernarfon, where many people also work, and so their focus is elsewhere and not the village.

And I almost forgot to say, the shop has a small secondhand book shelf, so my pack was made heavier by:

Tony Hawks, Round Ireland with a Fridge, Ebury Press, 1998

Simon Winchester, The Map that Changed the World, Penguin, 2001 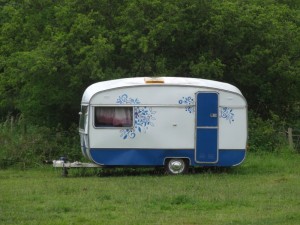 The Coast Path from Tre’r-ddol to Borth follows the main road for about half a mile and then goes along a dyke, emerging in the middle of Borth. However, this misses nearly two miles of beach. So instead I take the car route to Borth out of Tre’r-ddol. This leads along a B-road, which may be more busy in mid-season, but is certainly not so now. This is a longer route than the official path as it swings further north, but hits the coast nearly two miles north. The road itself swings round and follows the coast with a golf course between, but at the point at which it swings round to track the coast there is a bridleway leading to the beach. 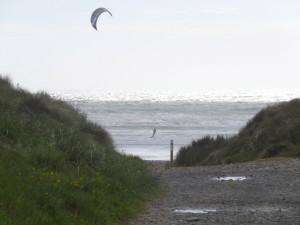 At high tide one would either have to (a) balance on the sea wall, (b) walk over the piled pebbles at the top of the beach, (c) walk along the edge of the golf course and risk being told off, or (d) go back to the road. Happily, the tide is low, so I walk along the beach, stepping over groynes periodically.

It is glorious, the wind is beginning to pick up, so it has that excited wildness of winter sea, but not so cold!

I recall the first time I visited Borth, thinking it was nice enough, but very run down.  Nowadays, there seems to be a slightly bohemian side with the odd gallery alongside the fish and chip shops and amusement arcade, not to mention  kite surfers.  Incidentally, the official Coast Path emerges from an alley beside the amusement arcade. I feel there is some sort of message there. 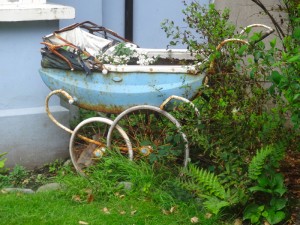 The housing is quaint without being whimsical, tiny cottages cheek by jowl with still small, but more substantial houses.  At the north end of the prom there is a terrace of three-storey Victorian houses painted in those nursery colours and in the road leading to the station a glorious terrace of rainbow-painted houses, with tiny pillars supporting their upper bays.

The wind picks up further as I continue the five miles on to Aberystwyth. The path runs along the clifftop the entire way. Being a cliff path it goes up and down a lot as it descends and then climbs back out of various coves or where streams cut tiny valleys, but it is easy ‘Sunday afternoon’ walking. The wind lashes the waves in the rocks below.

The rock strata are almost vertical with one cliff face riven almost completely along the strata line, leaving it sheer and smooth like a giant child’s slide.  Where the vertical strata have been sliced off by the sea, the black parallel lines poking through the sand are like the carbonised pages of a burnt book.

Just a mile or so before Aberystwyth is the caravan settlement of Clarach Bay, complete with its own mini-funfair. The dodgems are still and the hot dog stand closed, as the wind whips sand and dust off the beach, stinging eyes and legs. 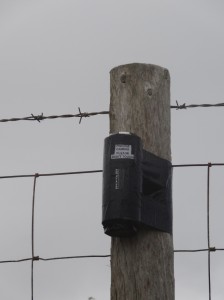 Another short cliff stretch takes you above Aberystwyth, but, oh, how are the mighty fallen. The pride of Aberystwyth, maybe slightly behind the University, which was created from public subscriptions, is the Camera Obscura, reached by the funicular railway, but the first glimpse of the octagonal building says ‘Camera Obscura‘ on one side, and ‘Frizbee Golf‘ on another. However, earlier along the path an empty can was taped into a post with a notice, ‘pinhole camera, please do not touch’; the love of optics has not died.

On the train back to Machynlleth to pick up the van, I sit opposite a woman and her grown-up daughter. They will miss the last train on to Newtown, where they live, as, in the words of the daughter over the phone as she tried to arrange a lift, "My mum was pissed and forgot her bag so we had to go back for it. When we got back to the station the train was just pulling out".

I will never know whether the house was intact when they returned.