The day did not start auspiciously; the wet forecast was mirrored in the heavy clouds.  However, I had woken early enough to get down to Tywyn station for the train at quarter past seven, and successfully reversed through the narrow gate of Jane Whittle‘s yard, so it seemed to be going well.

Entering Tywyn there are signs to the station, but then they stop – have I missed it?  But then ahead I can see the railway bridge, and something that looks vaguely station-like.  As I turn I see that instead, in large letters, it announces ‘Tywyn Spiritualist Church‘. Further on I pass the railway station for the Tal-y-Bont Railway, and then the town peters out.

Just in time I park as a train draws in. I rush to the platform, rucksack and clothes in my arms.  I realise I’ve forgotten the water bottles, but the conductor says I have five minutes; back at the van I realise I am still in sandals, not the ideal footwear for hill walking on a wet day.

Barefoot, boots and socks clutched to my chest, I clamber aboard, and collapse into my seat. A few minutes later the train pulls away … in the wrong direction. There is a train at quarter past seven going south as well.

The conductor is very sympathetic and does not charge for the trip to Aberdyfi, where I can get a bus north to Fairbourne. A lady at the end of the carriage tells me where to catch the bus.

So, about an hour later than planned, I get to Fairbourne, where I hoped to get a breakfast before setting off.  Unfortunately the café near the station does not open until 10am, so with a Snickers bar for my breakfast I set off out of town up into the hills.

This day will have a lot of inland walking in the hills that rise from the sea here. The main road and railway both stay close to the sea, but with no footpath, so the Coast Path heads steeply upwards towards the disused quarry that hangs above the town. The path is initially well signed, until it gets into the quarry where, I assume, the ground is too stony to hammer in a post.

My first wrong turn of the day: I follow the main path into the heart of the quarry when (obviously) I should have taken the smaller side track that leads further up the hillside.  Happily not too much of a problem as there is soon a gate clearly signed ‘no entry’, and the smaller track does have a Coast Path roundel … just round a bend out of sight of the path junction. However, going into the quarry meant (a) I got to see some of the remains of abandoned quarry machinery and (b) some misty views of the sea. Indeed, for the first part of the day when I see the sea it is almost always because I am on the wrong path.

Oh yes, and it started raining – hard, as the path led up above into the cloud line.

Above the quarry the track turns through a gateway through a stone wall. There is no sign. On the on hand the track through the gateway is the larger track. However, (1) the gateway has wooden side posts on which it would be easy to nail a Coast Path roundel, if it is the way, (2) it is a turn and surely that would be marked, (3) there is a small track leading straight onwards through the grass and gorse, (4) major paths are often simply where the tractor goes, not a sign of people’s passing.

So I go straight on, not through the gate.

I was wrong.  After a while the track breaks up into multiple tracks, which pick their way across bog, through gaps in the broken-down stone walls. I try to follow the contours, keeping a wall in sight as the visibility is not more than 50 yards, until, eventually, I meet a solid, barbed-wire-topped wall that leads down the hillside. 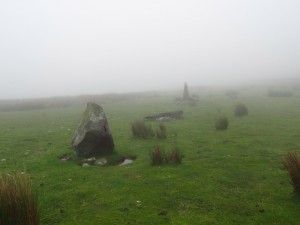 Corralled by the continuous walls, I nearly double back on myself until I eventually climb a gate onto the small road I should have joined by an easier route. On the plus side, I was evidently closer to the sea … I could hear the waves breaking through the mist even though I could not see them; and I also went past three standing stones in a line … although with 50-yard visibility I could not see if this pointed along a ley line of monuments.

I just wish that was my last lostness of the day, but each time I found the Coast Path, in a short while I would lose it again. At one stage I must have walked a path that crossed over the true path, but saw no indication.

However, on the whole I ended up closer to the sea than if I’d followed the official route, even if it meant climbing the odd locked gate! The final wrong step led me along a minor road that ran alongside the railway, just 50 yards from the sea, while the official route was somewhere up among the hills.

A local philanthropist has funded a new cycle and pedestrian bridge across the Dysynni. This will save a six-mile inland journey upstream around the flood plain and estuary. I can see that the bridge is there and the lead-in path looks nearly complete, but there are no notices to say that it is now open. Although tempted to see if it is passable, I decide to follow the formal Coast Path as it is now clear and so for today I have only managed to be with it for about a quarter of the distance!

Food had been a problem all day. After being too early for breakfast at Fairbourne I hoped to get some at the first drop from the hills into Llwyngwril, but the pub only opened for lunch at 12:30 and the café was closed; whether it was too early, out of season or permanent was not clear. After this the path bypasses every village until Bryncrug at the end of the Dysynni Valley.  Its pub was open and had an interesting, but inexpensive menu. However, by this point I was only maybe an hour from Tywyn and remembered a lovely little café in an old cottage by the sea, so decided to press on, but stocked up with more Snickers and Peperami at the shop. 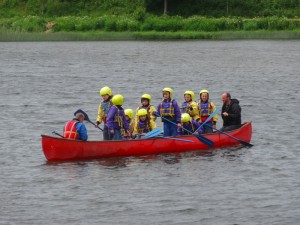 The last stretch into Tywyn is easy along the dykes beside a tributary that runs into the Dysynni and then the meandering Dysynni itself, where, in the widening tidal river, a party of school children were being taught balance and confidence in the water by jumping in a boat, and, on the banks, the odd dog walker and runner passed. Eventually the path passes a ruinous brick bunker, along the remains of an old wartime, metalled road, soft-edged, the grass encroaching on either side, through a static caravan site, and reaches the prom.

To either side waves rush onto sand held captive between fresh wooden groynes, sea defences renewed, a stone plaque says, the year of Prince Charles’ Investiture. Sand, waves, groynes, prom and seafront houses are all soft-focused by the wind-flung spray.

From the seafront, on a wet and wild day, Tywyn has that abandonment of the winter seaside town. A few scattered pensioners walk, rain-coated and bent into the wind.  "We’ve had flaming June,", remarked one, "now its another kind of ‘flaming’ June."

I love this starkness.

Tywyn seafront is not thickly spread with amusement arcades, but they appear intermittently and are all open; but the ice cream shops are all closed, except one café/kiosk in a modern red-brick municipal building, which makes me think of  a tiny library, or maybe a large public convenience. However, I pass by the temptation of a hot dog, or maybe seaside chips, and eventually find, at the end of the prom, the little cottage café.

I recalled the Pebbles Tea Room on a hot summer’s day, its maze of small rooms and outside seating full, and either many books around, or maybe selling books as well as cakes. Although my heart was set on an all day breakfast, I would have been happy with toasted tea cake. Given the weather, the outside furniture was all in piles, but the window blinds were also shut, not a good sign. However, the door was open and as I approached a girl came to the doorway and stared quizzically at me. A few moments later, pushing her way through the dangling ribbon fly-screen, her mother appeared. Vainly I asked, "are you open?", but I was not surprised by the answer, "we open tomorrow".

I pressed on, with another Snickers to keep me going the remaining four miles to Aberdyfi.

This is a wonderful walk, flat sands, the sea breaking to the right, dunes to the left. Fast walking along the mostly hard, sea-damp sand, with just the occasional tide-washed sculpture, fire circle and abandoned or collapsed war-time concrete lookout, but with that vastness and openness that breathes the sea and opens the heart.

The sea is mid-height, but at low tide the sea-blackened remains of an old forest are the sole reminder of the land that is now lost.

Slowly the final bend appears, marked by one of the less ruinous war-time lookouts used well to hold beach dustbins.  A scattering of people appear also, speaking of approaching civilisation, and bright coloured kites swoop above the edges of the dune and shore, long before their attached leaping surfers can be seen. 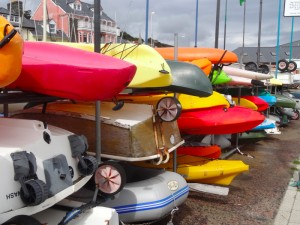 Aberdyfi itself appears gently, mostly a single line of soft-palette nursery-coloured, Victorian houses on the wooded hillside, until slowly the main town appears, huddled tight, clinging precariously between hill and sea as if it remembered the lost cantrefs too, drowned in drunken carelessness, the sunken bells of the dead cities pealing out at dead of night, a town that remembers that sea and land are not kind to mankind, shrugging us off with as little care as when we wash or even scratch an itch and a million skin mites are sent to oblivion.

However, I have little time to ponder as I go into the tourist board to check train and bus times and realise there is a bus due NOW to Tywyn.  After ten minutes I think I must have missed it, but as I start to walk to the train station for fear of missing that also, the bus appears and I hail it down … try doing that in a city!

Back in Tywyn to pick up the van, the town centre is more like a small market town, where the people of the Dysynni Valley come for cinema and shopping. Maybe it was once on the coast, and the dunes came after, or maybe it is simply built on solid ground, the memory of the lost cantrefs still sharp in the communal mind, until the age of seaside campsites and apartment complexes spread outward to the sea, houses built on sand.

And food? Well, with no time at Aberdyfi, the day’s diet was not the best, three bars of Snickers, two Peperami and a packet of Quavers, until, at 8:30pm, a much-needed pizza at the little pizzeria attached to Wynnstay Hotel in Machynlleth.  Not surprisingly, as I write this the following morning, my stomach is rumbling for breakfast.

2 thoughts on “Day 57 – Fairbourne to Aberdyfi”