a walker, a community pub, nuclear safety and a cutting-edge technology camping hut 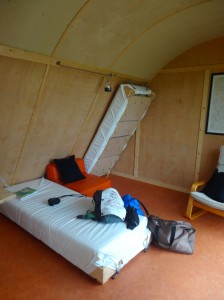 After a night in the MorphPOD I, surprisingly, wake with the alarm, not the dawn; the huge floor to ceiling window faces northward across the valley, so it only obliquely catches the morning light, but as I head across to wash, I see that the riding stables, another part of Brandy House Farm‘s activities, are already a hive of activity.

I have breakfast in the dining room, filled, like the kitchen, with interesting things: an old brass wood plane, something that I think is part of a fog horn, and a box labelled Antarctic Expedition 1904.

As I eat and he is about to leave, I meet Paddy Dixon, a photographer and outdoor writer based in Ulverston. He is doing just a short recce walk, at present, but is planning to walk the entire Wales Coast Path followed by Offa’s Dyke later in the year and write a guide book at the end. His publisher has been chiding him for not doing a Wales Coast Path guide yet, as he has previously done popular ones for other walks in the UK and elsewhere, including the South West Coast Path.

A little later two other guests arrive for breakfast before a day out riding. It was due to be windy and rainy, so they decide on a low-level route, but evidently the moors above the farm are open common grazing land, with no walls or gates, ideal for trekking and the odd gallop.

As I mention my last day’s walking and the impact of Wylfa, it transpires they both work in the nuclear industry as part of internal regulation, and gently, without being too direct, try to educate me on the safety of the industry.   Chernobyl of course was the Russians messing about, and at Three Mile Island containment was not breached … I seem to recall that the fact that the meltdown there did not break out of containment was more good luck than anything else, but maybe I misremember?

Actually I can imagine that the parts they work in are, barring major accidents or terrorist attack, relatively safe. However, the older plants due for decommissioning are in government hands and it is clear that they feel Sellafield‘s safety record is a thorn in the industry’s side. I can see how the construction and operation of a well-managed plant can be clean and safe (for the area around), but the spent fuel has to go somewhere, and eventually the plant needs to be dismantled and the thousands of tons of contaminated concrete and metal isolated for hundreds or thousands of years. 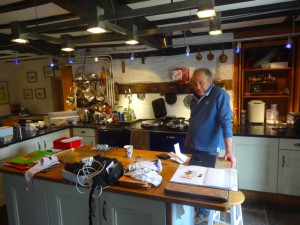 During dinner the previous night and in snippets over breakfast I learn a little more about the area. The closing of the local school has been a major blow and, as elsewhere, local shops, garages, pubs all have closed over the last 20–30 years.

The Felindre pub at the start of the track to Brandy House Farm, is The Wharf Inn. The stream here is not navigable, so I assume ‘wharf’ refers to a stop on a tramway, which, if I recall, were also called ‘wharfs’ borrowing the nautical term. The Wharf is under threat, as the current proprietor would like to do other things. However, there is a group hoping to launch it as a ‘community pub’. The logistics of this are quite complex, not so much the initial capital cost and first year or so of running, but the long-term management, when the excitement subsides and a long roll of volunteer bar staff has to be managed.

I recall in Switzerland hearing how it is not uncommon for isolated mountain communities to buy and manage local cafés that are due to close. Interestingly, recalling my MHA visit the previous Tuesday, in these Swiss villages it is the retired and semi-retired who are at the heart of these community enterprises, and I would expect the same in the UK. Maybe in coming years we will see community nightclubs run by octogenarians, I guess interspersing dance mix with swing and rock-and-roll. 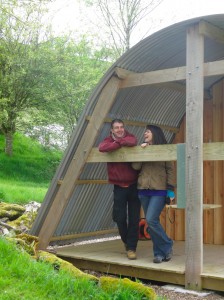 Annie and Nick arrive, who are the designers of the MorphPOD. The MorphPOD is not just a camping hut, but is really designed to make the best use of a small footprint, using materials that are sympathetic to their environment as well as using local skills and materials. Nick explained how the use of local artisans is not only valuable from an environmental and cultural perspective, but also good business sense. When there is a problem, or some need for a redesign, or addition, instead of a lengthy series of email correspondence or phone calls where each side half-understands the other, he says, "I just cycle twenty minutes down the road and sort it out".

In addition, MorphPOD is part of a larger concept of an integrated booking and access system. The aim is to have a network of MorphPODs and similar huts, linked through a central booking system. As a walker, you could, before you go, or through your phone on the move, book ahead, and get an entry code. The digital door locks are a bespoke design as off-the-shelf code entry systems expect levels of electrical or network connectivity that are impractical given the locations of the pods, and anyway tend to be too fiddly for a walker with cold wet fingers (I write with feeling as, writing in retrospect, I can hear the wind and rain outside that I will soon have to go out into and start walking for the day).

I love the whole concept of the MorphPOD and its associated booking system. It is deliberately designed to be affordable, with basic, but dry facilities, which can be extended by additional services, such as linen, or food, if required, but with a low basic price. The method feels closer to the YHA than the eco-chic yurt or tepee holidays, which are often a hundred pounds per night.  The use of technology is also perfect, nothing unnecessary, just a small amount where it will make a big difference.

The MorphPOD construction also makes me think of the Noust boathouse on {Tiree}} being built by TOG Studio summer school.  They also try to use (relatively) locally sourced materials (no wood on Tiree, so ‘local’ here means west Scotland), and blend new technology and radical design with traditional forms. The boathouse roofs are inspired by the ribs of a boat, with curves like an old barn, but are constructed from laser-cut plywood with softwood infill. 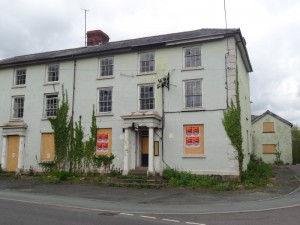 Too soon I have to take my leave as I need to get up to Warrington to meet Fiona ready to go over to Sheffield for a wedding.  I drive back north, and stop very briefly in Llanymynech to get a photograph of the pub with the bar half in England and half in Wales that I’d not photographed when I was there on day 20.