I’m going to put up a page with the rough itinerary, but need to estimate approximately how long it will take to get to each part of the coast.  The Coast Path web site has downloadable brochures for each segment of the path, which give the length of each part.  However, (i) some of these are a little vague, and (ii) the brochures are long and thin so hard to print out to read.   I will address these sometime, but for now, simply traced round the coastline from a 1:625,000 road map1. 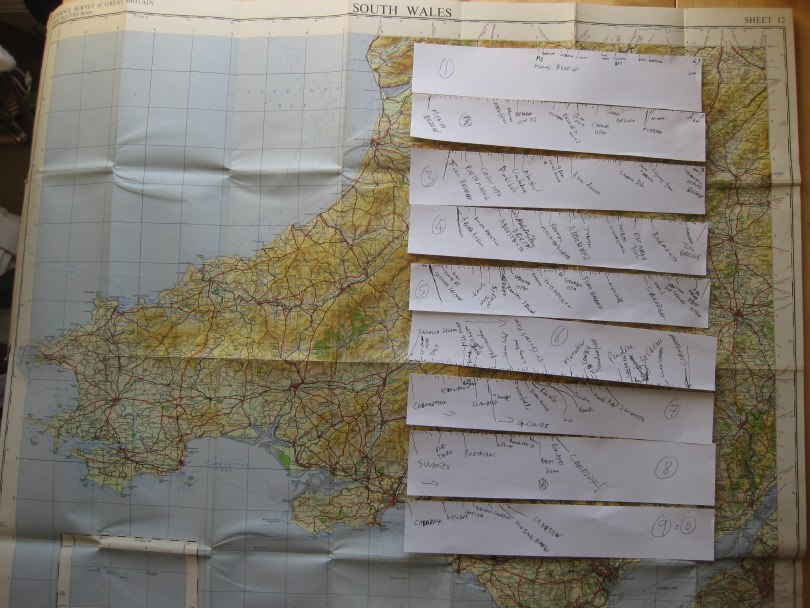 It took a while, but I did it while listening to Stef Lewandowski and Lucy Conway from EiggBox on  AmbITion Scotland webcast from Shetland, which was great.

I found it fascinating how long, and how short, some sections were.  The entire north coast from near Chester to the Menai Bridge was only just over half a paper strip long, whereas going round Anglesey, which doesn’t look that far, was nearly whole strip (one strip approx. 120 miles or 7 days walking).  This is a combination of the fact that circumferences are bigger than you think (recall pi x diameter) and the fact that Anglesey has a ‘rougher’ outline (more coves and headlands) than along the north coast.

It will be interesting when I add up the lengths to see how they compare with the official 870 miles of coast2, tracing on a map rounds off all the little bumps and bends, so I’ll get some idea of just how fractal the Welsh coast is!